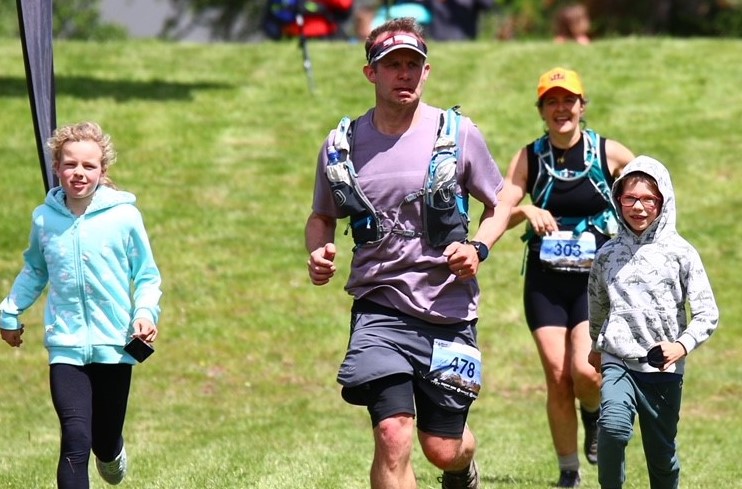 Mark Ford attributes being able to walk and talk again, let alone run, to the power of a step-by-step, day-by day approach to life. Photo: Kathmandu Coast to Coast

Having completed three Kathmandu Coast to Coasts and several ultra-marathons, the executive manager at Fulton Hogan and father-of-two from Christchurch was getting set to compete in yet another ultra-marathon.

Then, on the morning of February 6, 2019, he woke up unable to speak or walk, keeping his eyes open was near-impossible and the 40-year-old had almost no control over his emotions.

An undiagnosed small hole in his heart had allowed a clot to enter the bloodstream and lodge in his brain. He had suffered an ischemic stroke and his future was entirely uncertain.

Within hours, Mark and his family were at Burwood hospital where he was admitted straight to intensive care.

For someone who had lived his entire life by setting challenges for himself, nothing had prepared him for this.

“It was brutally hard - nothing comes close,” Ford said.

Almost two years to the day later, he will be literally climbing a new mountain.

He will take on the run leg of the 2021 Kathmandu Coast to Coast as part of a three-person team, alongside his Fulton Hogan workmates Craig Stewart (cycle) and Peter de Goldi (kayak).

Ford attributes being able to walk and talk again, let alone run, to the power of a step-by-step, day-by day approach to life.

“Bolts out of the blue, like a stroke, can surprisingly not always have negative side-effects.

“As humans we tend to take so much for granted. I’ve since learned not to take anything for granted, never to dwell on problems, and never to ask: ‘Why me?'

“If you have a major setback and are able to ask: ‘Why not me?’ you’ll be in a much better position to overcome it.”

The power of encouragement also helped him to heal.

"I have never been around people as encouraging as those in the medical community," he said.

"This constant positive reinforcement is something I want to take in to every aspect of my life, including corporate life.”

Ford said despite taking some positives from his stroke and gradual recovery, he will never be glad it happened - but has learnt a lot from the experience.

"When, in a flash, you go from life as normal to being unable to function as a father or to work, you re-evaluate what defines you.

"Ultimately, I’ve learned it is not the immediately visible things that matter, but the quality of relationships and things like inner character."

The support and love of his wife Keryn and children, Tayla and Kobe, has been important.

“Because the focus is on the person with the stroke, the efforts and sacrifices of the support team at home can go unrecognised. They have been wonderful.”

Ford said his workplace had also been “incredibly supportive”, giving him the time needed to recover.

Nine months after the stroke he came back to work for eight hours a week and has since gradually increased that back to full time.

“I have been humbled by the response of my colleagues,” he said.

Ford is now hoping his two colleagues can come up with the goods in the Kathmandu Coast to Coast.