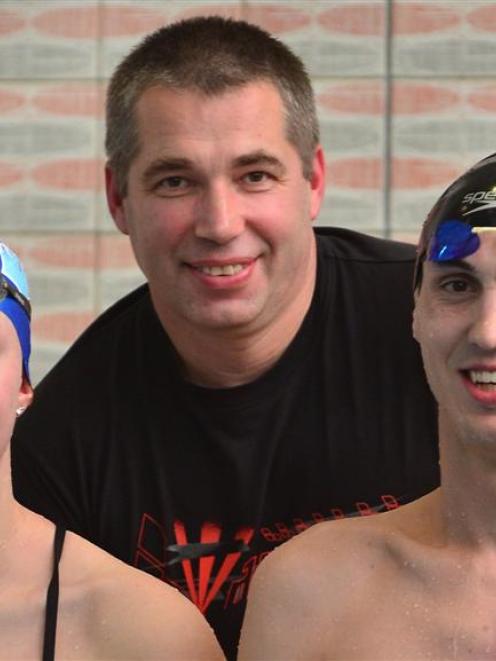 Moana Pool coach Gennadiy Labara and Otago swimmers Kate Godfrey and Matthew Glassford are looking forward to the World University Games in Russia. Photo by Peter McIntosh.
Gennadiy Labara has been back to his homeland several times since he left the Ukraine, but this will be the first time he has gone back to Russia in an official capacity.

Labara, the professional swimming coach at Moana Pool for the last six years, will coach the eight-strong New Zealand swimming team at the World University Games in Kazan.

The big advantage he has over other New Zealand coaches is his ability to speak fluent Russian.

He also has two swimmers from his Moana Pool squad - Matthew Glassford and Kate Godfrey - in the team.

Labara grew up in the Soviet Union before communism dissolved in the early 1990s and has brought the hard-nosed Eastern European approach to his coaching at Moana Pool.

''I expect the eight swimmers in the team to do their best,'' he said.

''My expectations are high for them.''

The standard of competition in swimming at the World University Games will be high and the swimmers will have to be at their best to reach the finals.

Reaching the podium will be difficult but Labara's understanding of Russian life and the language will make it easier.

It is special for Glassford, whose performances have lifted over the last six months after having serious health problems last year.

''It will be the biggest event I have ever competed in,'' he said.

''I'm looking forward to it.

''It will be a major challenge for me after what I went through last year. My health is so much better.''

Glassford acknowledged the help from his mother, Karen, who put him on to Wellington natural health practitioner Gary Moller last year and arranged for him to start a course at Otago Polytechnic this year.

Glassford knows he will face stiff competition in Kazan but has set himself realistic goals.

He wants to break the 2min 17sec mark for his specialist 200m breaststroke. He broke the Otago record in the event when he won a bronze medal at the national open championships in Auckland with his time of 2min 17.01sec.

Godfrey (19), a neuroscience student at the University of Otago, will be competing in five individual events - 50m, 100m and 200m backstroke and 200m and 400m individual medley.

Godfrey competed in the Isle of Man at the Youth Commonwealth Games two years ago and this will be the second time she has competed in Europe.

''I learned a lot at that meet and my swimming has improved since then,'' Godfrey said.

''I will be much better prepared this time.''