It has been left to the Hamish Hunter-trained gelding to keep his family name up in lights following the retirement of his star full brother, Tiger Tara, last month.

At his last start at Winton, Stingray Tara produced a win up with those of his brother. Sitting parked throughout a mile (1609m) did not stop the 4yr-old who was driven by junior driver Kerryn Tomlinson.

Matthew Williamson is looking forward to getting back in the sulky behind Stingray Tara in race 1 today after watching that race from the sidelines.

“It was a pretty big effort at Winton. If he could produce a run like that he would have to be hard to beat.”

Slainte will start at short odds in race 2 after impressing in his trials for trainer Phil Williamson. The horse started at Cromwell on Sunday, but was deemed a late scratching after interference at the start.

“He has got the ability, but he is going to have to do things right to win,” Williamson said.

“We have made a couple of changes after Cromwell, so hopefully that will help him.”

The father and son combination of Phil and Matthew Williamson also start Only One Way. The 4yr-old produced an emphatic win in his last start at Omakau and he should continue his hot form in the 2700m feature handicap trot.

“He is going really well, but he is getting back in the handicaps. He should still be a pretty good chance.”

Star Ruler is one of two strong chances Williamson drives for trainers Geoff and Jude Knight.

The 6yr-old went close at Cromwell on Sunday and looks well placed to win race 5.

“He seems to have lifted a bit lately, so he has to be a good chance,” Williamson said.

“He is a horse that will need the right run, though.”

Jacks N Jazz may have been an even stronger winning chance than his stablemate had he drawn the front line of the mobile.

Drawing barrier 1 on its second line means he will need luck. If he gets it, the 6yr-old could figure in the finish, Williamson said.

I’m Watching You is Williamson’s drive in race 6, a graduation final filled with talented types.

If the 3yr-old could not win today he would be a horse to follow when he returns to maiden grade, Williamson said.

Canterbury raiders Yossi, Folklore and Moonlite Drive look the horses to beat in the 2200m race.

Williamson drives Kingmaker, who takes on another talented field in race 10, today’s fast-class pace. The Brad Mowbray-trained 4yr-old takes on leading contenders Franco Santino, Bettathanfast and Cast No Shadow in the 2200m mobile.

Williamson also drives A Rocknroll Maid in race 3 and I Had A Dream in race 4. 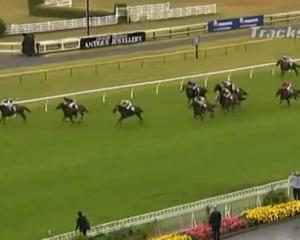