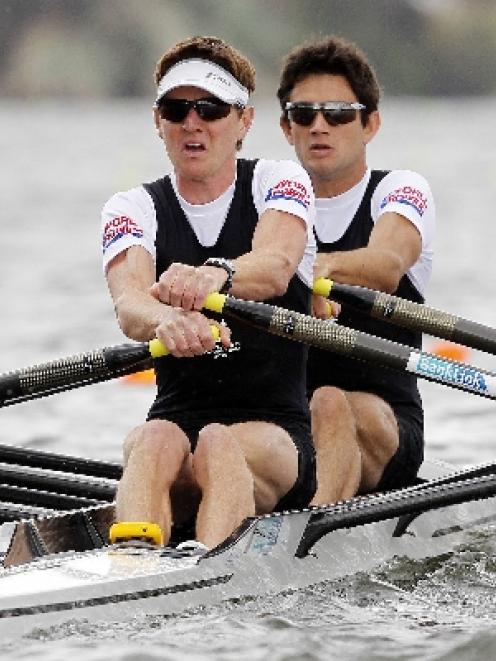 Beijing Olympic gold medalists Zac Purchase and Mark Hunter threw down the gauntlet with a super-charged start which left New Zealand's defending world champions Storm Uru and Peter Taylor in their wake, and maintained momentum right to the line for a six munutes, 55.50 seconds win.

Uru and Taylor stuck to their work into a brisk headwind to secure second nearly two seconds astray, their 6min 57.48sec well clear of the third-placed Portuguese duo.

"I know if I was racing at home, you have the expectation that you're world champions, your home nation, everyone's expecting you to win - you want to go out there and out there to perform," he said afterwards.

"So I'm sure they went out there to win. They would not want to come second."

The difference between the two crews really came down to a barnstorming British start - at the first 500m split, the Olympic champions had opened out a gap of 1.57sec and at the 1500m mark, they had extended their lead to more than four seconds.

Although Uru and Taylor regained some respectability with a strong final quarter, there was never any doubt surrounding the British victory.

Hunter said he and Purchase had approached the race with some respect.

"The semifinal is the race of death - it's a tough one to make the final, and it added to the spice a bit to have the Kiwis there, the world champions, so it was all good fun," Hunter said.

"Having them beside us made it a bit more exciting, in our eyes it brought the final slightly forward to the semfinals.

"Come the final, we're back to where we'd like to be and we're going to go out there and do the job again."

Uru took a more laidback approach, saying neither he nor Taylor were too fazed by today's loss, preferring instead to focus on winning the race that mattered.

The second semifinal was won by China in a slightly quicker time of 6min 54.81sec, with Italy and Canada rounding out the placings.