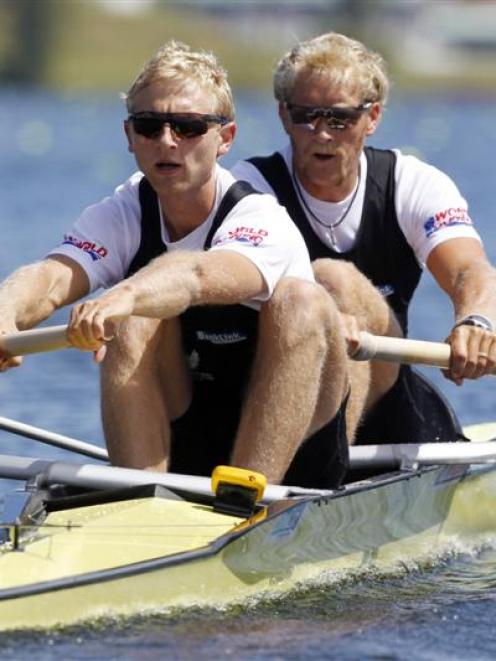 New Zealand's Hamish Bond, left, and Eric Murray compete in the Men's Pair heat 2 race, at the World Rowing Championships, Lake Karapiro, Cambridge, Waikato, New Zealand, on Monday, November 01, 2010. Photo by Wayne Drought/NZPA.
Defending champions Hamish Bond and Eric Murray, of New Zealand, have played down the penalty they received for being late for the start of the men's pairs heat at the world rowing championships on Monday.

Crews are required to check in at the start four minutes before their race.

"We mistimed our warm-up," Bond said.

"We were given a penalty but it was no tragedy and no damage was done."

The penalty meant the New Zealand pair would have been disqualified if they had beaten the buzzer at the start.

"We were extra cautious and waited for the light and the buzzer before we started," Bond said.

"We made sure we got a clean start."

Bond and Murray were slow at the start but soon caught the field and were out in front before the 500m mark.

"It wasn't our greatest race but when you are that far in front it is difficult not to feel good."

The main rivals for the New Zealand crew are Britain's Andrew Triggs-Hodge and Peter Reed, who finished 4sec faster than the New Zealand when winning the other heat in 6min 21.90sec.

"We haven't lost yet and want to keep the record in the semifinal. But at the end of the day it is all about finishing in the first three to make the final."

Bond and Murray are not complacent and had two training sessions on the water yesterday and will have another one today.

"We just wanted to make sure we are clicking over," Bond said.

The big plus for the New Zealand team yesterday came in the eights, with the men's and women's crews qualifying for tomorrow's repechage.

When the world championships was held at Lake Karapiro in 1978, the men's eight was the only New Zealand crew to reach the podium.

It won the bronze medal.

It is different today, as the best rowers are in the smaller boats and rowers who do not qualify in those combine in the eight.

The young New Zealand crew rose to the occasion and illustrated the depth in New Zealand rowing.

It finished a close second behind the world champion German crew that has come to Lake Karapiro after an unbeaten season in Europe.

Germany won its heat in 5min 24.62sec after putting in a series of moves in the third 500m.

The Kiwis lifted their rating and finished second in 5min 25.40sec with China third in 5min 28.39sec.

Britain won the other heat comfortably in 6min 25.34sec.

The United States had the fastest heat time in the women's eights - 6min 00.52sec.

"Both crews are under the age of 23 and this is great for our depth," Burrow said.

"It was brilliant to bring these crews here to experience the atmosphere. They have responded."

Burrow, from the North End club, was thrilled with the performances of club members Lucy Strack and Hamish Bond, who have advanced to the next level.