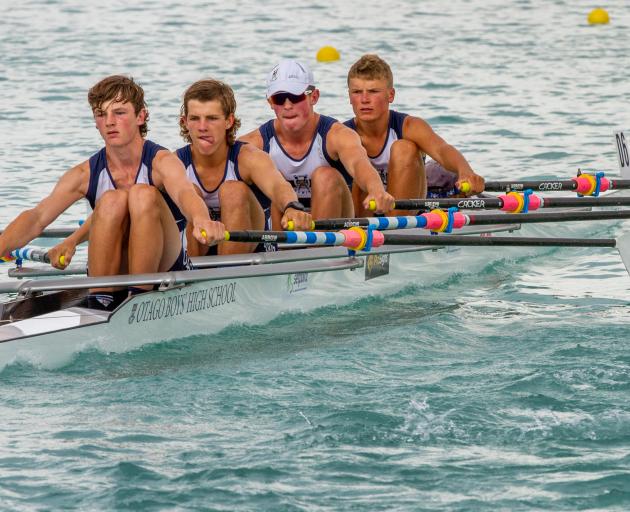 The Oamaru rower, representing the Southern RPC, claimed two gold medals and a silver in the premier grade at the South Island Championships on Lake Ruataniwha.

Golds followed in both the double and quadruple sculls.

Nathan Luff and Mark Taylor (in yellow), of the Southern Regional Performance Centre, race out of the starting blocks in the men’s premier double sculls event to claim gold
Eva Hofmans, of the Otago Rowing Club but representing Southern RPC, bagged a silver in the premier double and gold in the quadruple sculls.

In the lower grades, it was the Central Otago clubs which stood out from the South.

Notable among those was the Smith family — Simon and children Sophie, Ruby and Max all in the medals.

Simon claimed gold in the senior single sculls, while also winning silver alongside Greg McLaughlin in the double sculls.

Sophie (15) won a convincing gold in the under-16 double sculls, alongside Malia Banks.

She and Banks also joined Paige Furrie, MacKenzie Ealson and younger sister Ruby (11) to win the under-19 coxed quadruple sculls.

Alongside that, she was part of the under-17 eight which won bronze.

Wakatipu had similar success, notching up 20 medals, including 10 golds.

Many of those golds came in the masters races, although several age-grade crews featured strongly.

That Wakatipu group also formed half of the silver medal-winning under-15 octuple sculls crew.

Mackley and Key finished third in the double sculls, while Thomson was third in the intermediate single sculls.

Oliver Bisley and Oliver Herron also had a successful regatta, claiming silver in the under-17 double sculls and gold in the under-19 quadruple sculls.

The Otago club was the best of the Dunedin clubs.

Jack Pearson won gold in the under-17 single sculls and bronze in the double with Mark Smith.

Beating them were Bisley and Herron, as well as fellow Otago crew Freddy Wright and Ben Dyson.

Smith and Pearson were also part of the gold medal-winning crew in the under-16 quadruple sculls.