'Heartwrenching' result for All Blacks 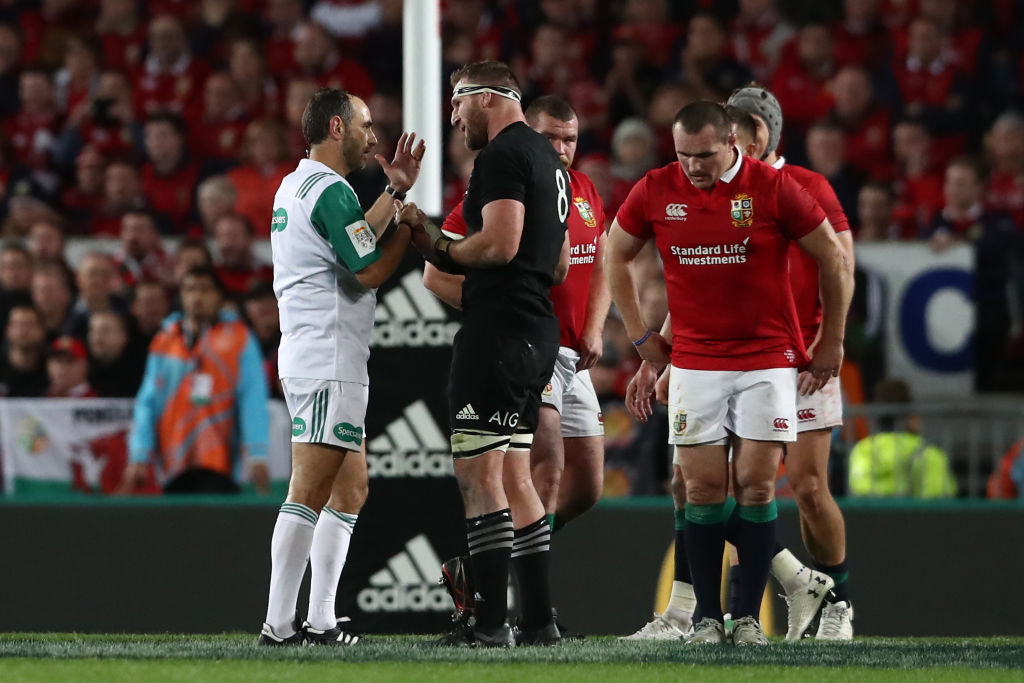 All Black captain Kieran Read remonstrates with referee Romain Poite after Poite awarded a scrum rather than a penalty in the last minute of the match. Photo Getty
The British and Irish Lions held the All Blacks to a tense and dramatic 15-15 draw in the third test on Saturday to share a series that few had expected them to come so close to winning.

A hush descended over Eden Park as the final whistle was blown to end one of the most anticipated rugby matches of recent years, with the teams, as well as a series, deadlocked.

The Lions will go home the happier after almost performing the Herculean task of beating the dominant team of the modern era twice at home.

"I think for us to come here against the back-to-back world champions and draw the series is an unbelievable achievement, especially when we had been written off and everyone was talking about this being a 3-0 whitewash," said Lions coach Warren Gatland.

All Blacks captain Kieran Read said it was "heartwrenching", adding that he would have traded all 100 of his test caps for a victory in this one match.

The world champions' hopes were dashed when referee Romain Poite backtracked on the award of a last minute penalty that surely would have given them victory.

It was only the second drawn series in more than a century of Lions tours, the 1955 tourists also shared a series with the Springboks, and All Blacks coach Steve Hansen suggested it was not an unreasonable conclusion.

"It's a bit like kissing your sister and no-one wants that," he said.

"But there's been some really good rugby played over the series and perhaps a drawn series was fair. It's not a World Cup final, so if you're good enough to get a draw then maybe it's right that both teams get recognised."

It was a third thunderous contest in three weeks. Almost every inch of progress was hard-earned, the tackles flew in and players were back and forth off the field for concussion tests with troubling regularity.

The Lions came into the match expecting a backlash from the hosts after the 24-14 victory in Wellington last week that levelled the series and they got it with a 15th minute try from Ngani Laumape quickly putting them on the back foot.

A Beauden Barrett intercept as the Lions attacked the home line got the All Blacks down the other end of the pitch and the rookie centre was on hand to pounce when Barrett's crosskick was knocked back by fullback Jordie Barrett.

The Lions patiently worked their way back into contest, just as they had done with the tour, after starting out with an unimpressive victory over a scratch team of semi-professionals and losing the opening test 30-15.

Flyhalf Owen Farrell kicked his first two penalties to reduce the deficit to a point before the hosts struck again five minutes before halftime.

Jordie Barrett, playing only his second test, was the beneficiary as the All Blacks backline finally got their passes to stick and a Laumape offload created the space for the 20-year-old fullback to give the hosts a 12-6 halftime lead.

Winger Elliot Daly opened the scoring in the second half with a huge penalty from more than 50 metres that set the tone for the remainder of the Lions' scoring.

They were still looking unlikely to breach the All Blacks line even after flanker Jerome Kaino was sin-binned after 50 minutes for a dangerous tackle on Alun Wyn Jones that left the Welsh lock dazed.

Farrell welcomed Kaino back to the pitch with a 45-metre penalty that levelled the scores at 12-12 but Beauden Barrett put New Zealand back ahead eight minutes later with his first penalty.

Again, Farrell mustered up another huge effort to get the Lions back on terms two minutes from time but Poite raised his arm for an offside penalty to the All Blacks from the ensuing kickoff.

After a discussion, however, the French official changed the call to a scrum in a decision that is likely to be hotly debated for years to come.

"We are accepting of the decisions that were made and whether we agree with them is something that we will discuss with the referees."

Despite the anti-climax of the conclusion, the 48,000 fans packed into the stadium and millions more watching on TV around the world were witness to the vitality of Lions tours as a concept even so deep into the professional era.

"After the success of the tour with the fans and the games and how brilliant the atmosphere has been, if you're in South Africa then you'd be pretty excited about four years time," said Gatland.