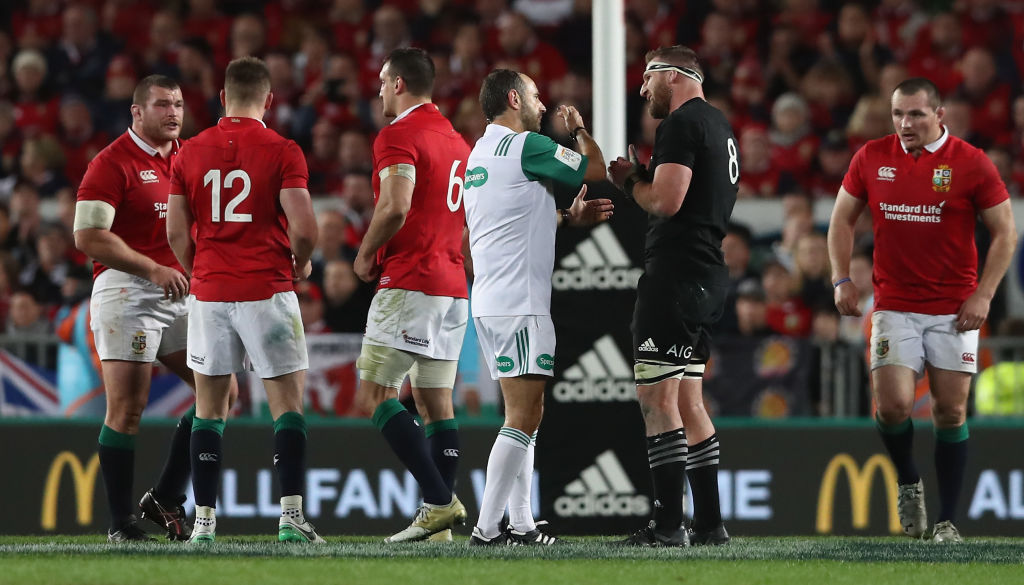 Romain Poite the referee, talks to All Black captain, Kieran Read after he reverses a decision when he awarded a penalty to the All Blacks with only two minutes to go during the Test match. Photo: Getty
This Lions series deserved a fitting finale, and it has certainly got that, with referee Romain Poite set to feature prominently in the post mortems from here to eternity due to his decision in the final minute to change his mind on a penalty in front of the posts for the All Blacks.

The All Blacks went from winners, to drawing the match, to potentially winning it all in the space of a minute. When the dust settled the test was drawn and so was the series, but it won't finish there in the court of public opinion. 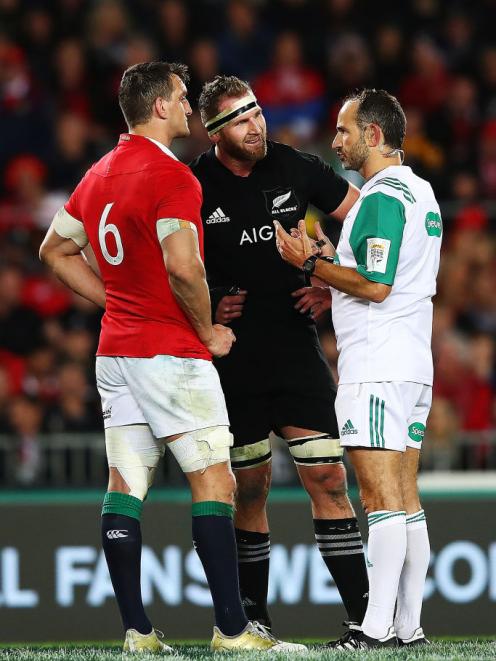 Sam Warburton of the Lions and Kieran Read of the All Blacks talk to referee Romain Poite during the Test match. Photo: Getty

The hugely controversial moment came when Poite penalised replacement hooker Ken Owens for playing the ball in an offside position from the restart of Owen Farrell's penalty which had levelled the score.

Poite immediately penalised Owens, then checked to see whether skipper Kieran Read's challenge was a fair one. It was, he agreed, but suddenly he changed his mind on the penalty and awarded a scrum instead.

"I thought you played the ball deliberately," Poite said to Owens.

Not surprisingly, Read, playing his 100th test, was bewildered at the decision. It was a bizarre way for the match to end, and Poite will not have enamoured himself to the All Blacks or to their supporters.

Whether it was his Wayne Barnes moment it remains to be seen, but it was significant and potentially cost the All Blacks the series.

Win, lose or draw, Steve Hansen said during the week, but even he can't have imagined a scenario where his side were in a position to win it, lose that lead with a couple of minutes remaining, win a very kickable penalty and then see that penalty changed to a scrum.

The pressure was always going to be on the officials in this massive test, with extra scrutiny on them given the Lions poor discipline in Wellington last weekend, and another controversial ending in Kyle Sinckler winning a penalty when leaping into the tackle of Charlie Faumuina.

To have any chance of winning this series decider, Hansen's forwards had to front, and they did in a match which threatened to open up once they scored their two tries through Barrett and Laumape but which turned into a heavyweight armwrestle, a finale that Warren Gatland was hoping for.

But for whatever reason, the All Blacks couldn't pull away. The Lions stuck with them and credit for them for that, but the visitors looked often unsure with the ball and didn't look likely to score a five-pointer apart from their one opportunity in the first half. 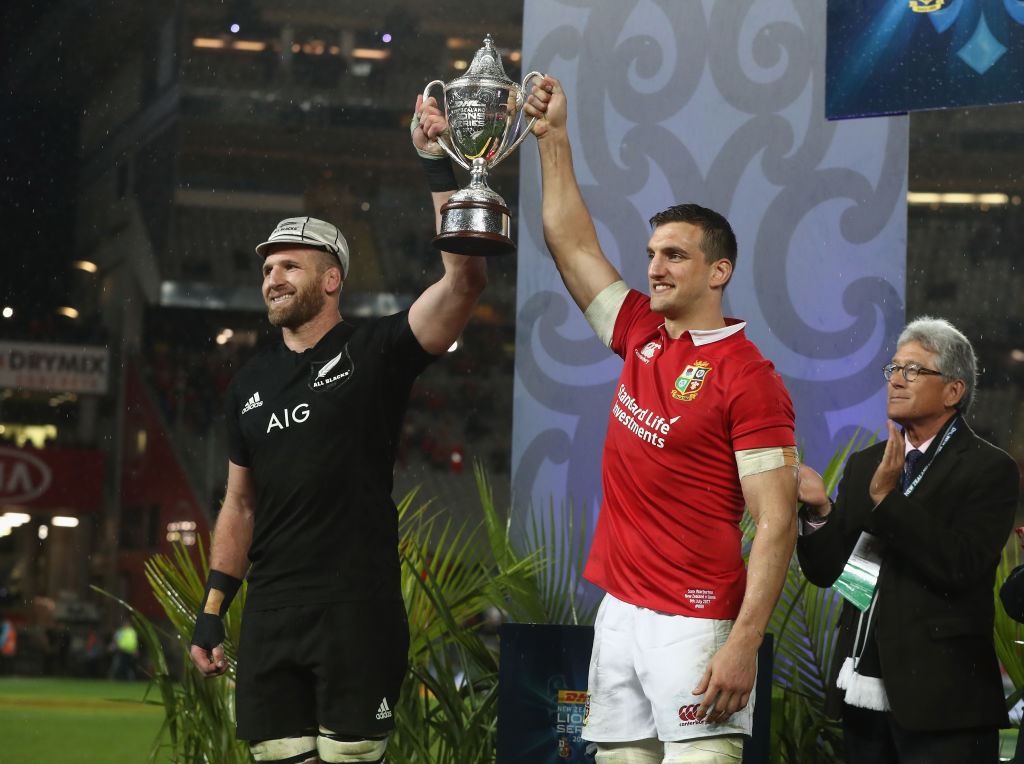 Sam Warburton, (R) the Lions captain, lifts the trophy with Kieran Read, the All Black captain after their sides draw the final test 15-15 and draw the series. Photo: Getty

Jerome Kaino's yellow card with 50 minutes gone for a high tackle on Alan Wyn Jones was in retrospect a crucial moment. The All Blacks were looking to turn the screws at that stage, the Lions looking to rest at every opportunity, and the sinbinning took away their momentum.

There were starring roles, as seemed inevitable for Ngani Laumape (24) and Jordie Barrett (20) who were starting their first tests for the All Blacks. Both scored tries and both had parts to play in each other's.

But the talking point will inevitably be Poite and the penalty that wasn't.