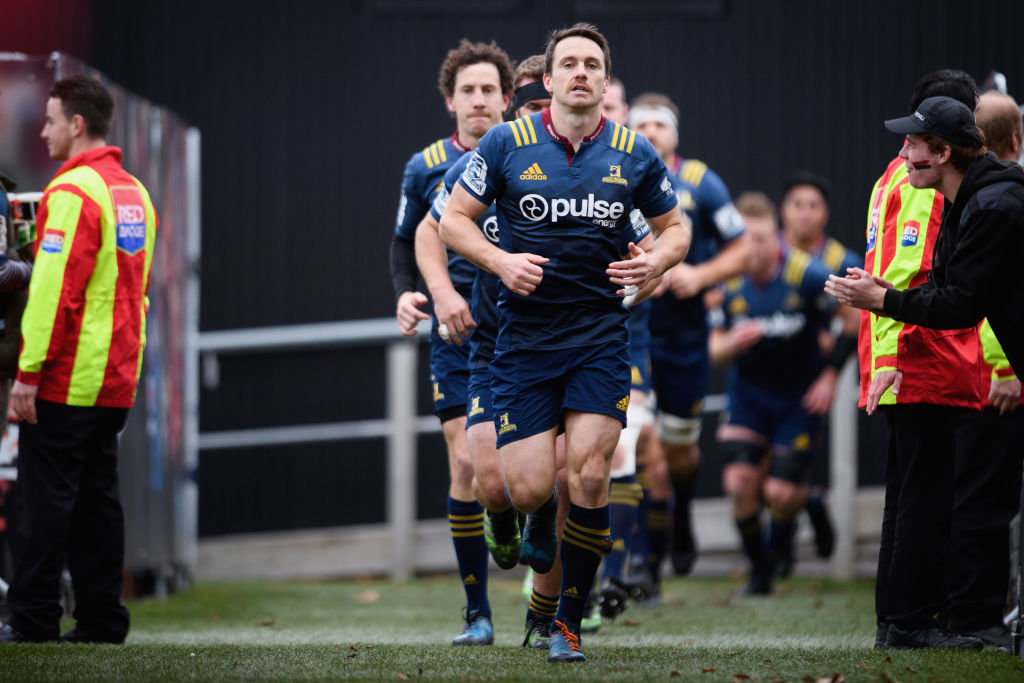 Ben Smith of the Highlanders leads his team onto the field. Photo: Getty
Wing Julian Savea is the high-profile absentee from the All Blacks Rugby Championship squad named this afternoon.

There is no room for the Hurricanes player, who turned 27 today. Savea, a virtual automatic selection on the left wing since making his test debut in 2012 has this year struggled to re-discover the sort of form which has seen him score 46 tries in 54 tests.

He was left on the reserves bench for the Hurricanes' semifinal defeat by the Lions in Johannesburg.

Another to miss out is Crusaders flanker Matt Todd, outstanding again for his team during their Super Rugby final victory over the Lions at Ellis Park.

The big winners in the 33-player squad are Chiefs prop Nepo Laulala, a front-runner to replace the departing Charlie Faumuina after recovering from a knee reconstruction last year, and Hurricanes wing Nehe Milner-Skudder, who is also back in the frame following injury. Chiefs prop Atu Moli has been named as an "apprentice".

All Blacks head coach Steve Hansen said: "Firstly, we congratulate all players selected for the Investec Rugby Championship, particularly Nepo and Nehe, who we welcome back.

Conversely, we commiserate with those who have missed out, particularly Julian Savea and the unlucky Matt Todd, both of whom have made great contributions to the All Blacks jersey and will do so again in the future, I'm sure."

Damian McKenzie has been named as a replacement for All Blacks vice-captain Ben Smith, who will take an extended break from the game following the first two Bledisloe Cup matches.

The All Blacks will play their first test of the championship against the Wallabies in Sydney a week on Saturday, returning to play them in Dunedin a week later.

"For us, it's case of re-establishing ourselves and building on our good work from last year and during the recent DHL New Zealand Lions series," Hansen said. "There were some clear things learnt in the Lions series and this is a great chance for us to implement those; to continue to grow our skill execution and the mental side of our game, and develop our leadership and the leadership group.

"The first two Bledisloe Cup matches will set the tone, as we know the Australians will throw everything at us, while we're expecting the South Africans and Argentinians to be as bruising and physical as always.

"We've learnt since the introduction of Argentina that there is a massive travelling component to the championship, which comes at a cost at the end of the year, so we'll be looking to implement some new strategies to try and overcome that."

Moli, a 22-year-old prop and former New Zealand under-20 player, will train with the All Blacks before their home tests.

"We've used the apprentice programme in the past and think it's hugely beneficial for a player's development, so we look forward to working with Atu," Hansen said. "He's an outstanding player and an impressive young man who has a big future in the game."
Highlanders hooker Liam Coltman wasn't considered for selection as he's been ruled out for the rest of the season with an ankle injury.