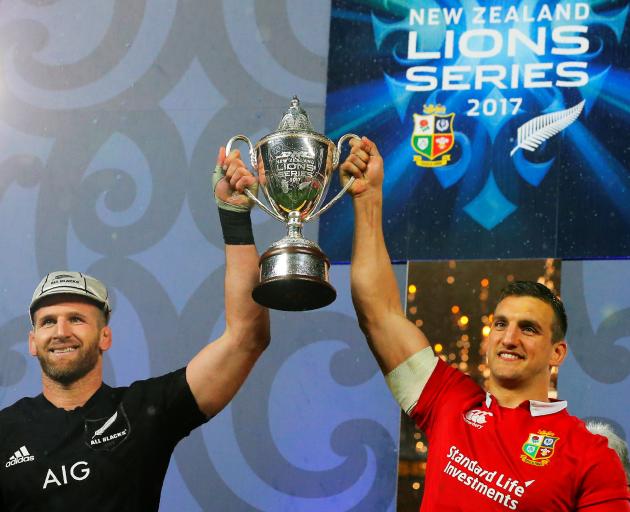 All Black captain Kieran Read (left) and Lions captain Sam Warburton jointly hoist the winner's trophy after the third test and the series were drawn in Auckland on Saturday night. Photo: Reuters.
All Black coach Steve Hansen is not going to throw referee Romain Poite to the wolves, although he says the law book must be simplified.

On Saturday night, after the All Blacks and the British and Irish Lions battled to a 15-15 draw at Eden Park, Hansen did not come out and criticise referee Romain Poite.

Poite controversially decided to change a penalty for offside, ruling Lions replacement hooker Ken Owens was accidentally in front of another Lion, giving a scrum instead.

After a night to sleep on it, Hansen said yesterday the side never wanted to blame referees and would not start now.

''It is frustrating and it is a game we could have won. If we had taken the opportunities we had created, we would have won,'' Hansen said.

''It was an average way for it to finish as well, but that is sport sometimes.

''I have always said the game is extremely difficult to referee. If you take [referee] Nigel Owen out, then they are supposedly the three best referees in the game at the moment. There is always going to be a human error. It doesn't matter who it is.

''What we have got to do is help them. Not bag them. Help them have less moments that they probably did throughout the series. That is a World Rugby thing. They lead this game and run this game. We have got to help the referees to make it easier for them to referee the games.

''That is where we have got to go. Where we have things that have multiple interpretations, we are always going to have human error.

''There is no point us as a team being frustrated. When we were young we were taught to respect the referee and play as he sees and that is what we are going to do. We had plenty of chances to win the game ourselves.''

Hansen said he congratulated the referee after the game.

The coach confirmed that Aaron Cruden and Charlie Faumuina would not be selected for the Rugby Championship team as they head to French club teams.

He expected Highlanders co-captain Ben Smith would be back playing for his franchise straight away, while Dane Coles was still three weeks away from resuming.

The drawn series would force the side to look at itself and get better at things.

''We have started to open Pandora's box but just did not get the chocolates.''

The side disbanded yesterday and players headed back to franchises.

Hansen said it was a great series and New Zealanders had to be realistic about the task the All Blacks faced against a Lions team.

''I said before they came out here they were the best Lions team to come out here in a long time. And that hasn't changed. They have some good players.

''We are so used to winning everything. This gives us a sense of reality. There are other teams out there that can play rugby, especially when you combine four of them into one.

''It is disrespectful if you think we have drawn the series we have gone backwards ... did we play well? Yeah, we played well enough to win. But we didn't.