By Adrian Seconi
0 Comments
No need to score tries when Cameron Millar is in the team. 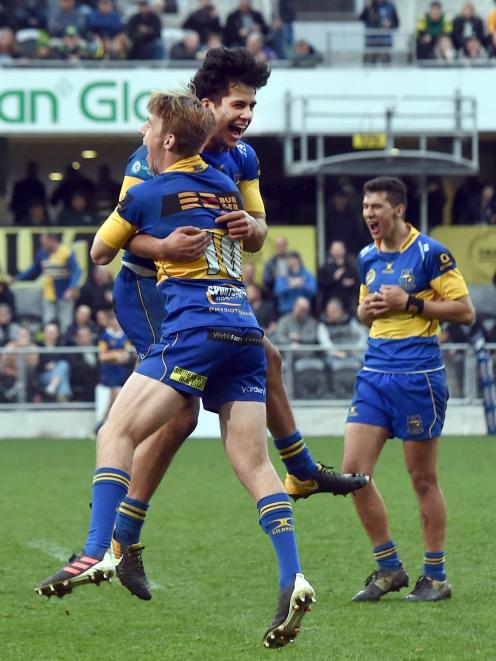 But as good as he was, even the superboot would have admired the wonderful effort from fullback Caleb Leef early in the first half.

He snapped off a drop goal from 45m.

Couple of things to note here. Millar’s six penalties were the most in a final since Hayden Parker banged over six for Taieri in its 51-6 win over University in 2014, and Leef’s audacious effort was the first in the final since Casey Stone landed a drop goal for Alhambra-Union in 2008.

And here is another statistic. Green Island became the first team since Southern in 1997 to lose the final despite scoring a try and keeping its line intact.

You had to feel for the Grizzlies. They played a lot of rugby and their fans turned out in numbers — big numbers.

The Eels clasp the championship shield for the fifth time in a decade.

The match attracted a crowd of perhaps 6500.

Taieri had plenty of fans in the bleachers as well.

Eels captain Ben Morris described the final as a ‘‘hell of a game’’.

‘‘It would have been nice to get a try or two but that wasn’t the case today. But we made the most of those penalties.

‘‘That droppie came out of nowhere.’’

Green Island suffered an early setback. Dangerous centre Levi Harmon fell awkwardly in a tackle and was stretchered off the field with a suspected broken leg.

Midway through the first spell, halfback Scott Emmerson picked up a concussion and was also replaced.

Millar opened the scoring with a penalty in the third minute. Leef’s remarkable drop goal doubled the lead.

But Green Island was showing plenty of ambition and playing with width.

Jake Te Hiwi was proving hard to take down in the midfield, while bruising No 8 Sean Jensen hit the ball up with menace.

The Eels were so well organised on defence but could do nothing about the next try.

Green Island shovelled the ball wide to winger Michael Manson and he showed some tremendous speed to score in the corner.

It was his 15th try for the season. He can run awfully quickly, that fellow.

Taieri nursed a 12-10 lead at the break and stretched that by six with a couple of early second-half penalties to Millar.

The Eels played the percentages nicely. They worked the ball up the field and played at the right end.

Loosie Nick Henderson got through lots of work and lock Don Lolo made some telling bursts.

It needed to score and it did. Veteran front rower Peter Mirrielees reached over in a tackle and Finn Strawbridge knocked over the conversion.

But Taieri showed composure to clinch back-to-back titles. It is the club’s fifth senior banner since 2011.