Debut a dream for Garden-Bachop 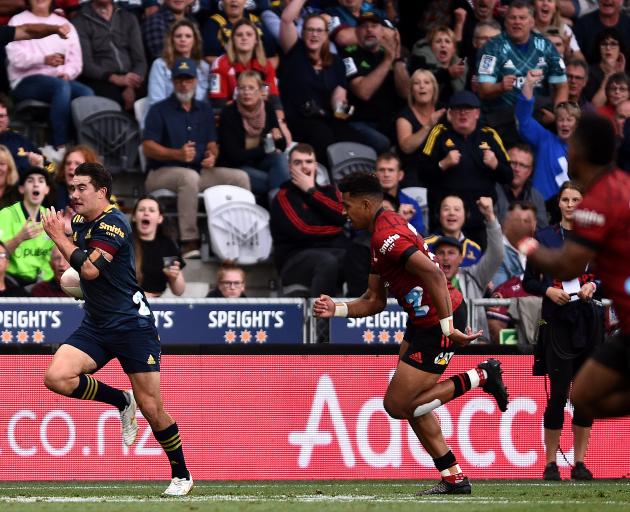 Few would have bet on Garden-Bachop getting a start in the first game of the 2021 season.

He had missed all of last season with a back injury and other niggles and was coming from the back of the field to get a start when the pre-season started.

But a couple of impressive outings in pre-season games forced him into the side, starting on the right wing against the Crusaders.

He looked at home in the high pressure stakes of Super Rugby and finished off a stunning move to score a try in the first half.

The Crusaders ended up winning the match 26-13 after leading 14-10 at the break.

Garden-Bachop was still on a high, straight after the game.

"I was pretty stoked to get the debut. It has always been a childhood dream of mine to follow in my father’s footsteps and tonight it came true," he said.

"It is probably the most nervous I have ever been in my entire life. I tried to sleep but my mind was racing."

His father, former All Black Stephen Bachop, played in the very first game the Highlanders ever played, against the Reds in 1996. Garden-Bachop’s mother, the late Sue Garden, also played rugby for the national side.

Garden-Bachop said his father did not burden him with too many messages.

"He just told me to take my opportunity when it came and just do what I love. Nothing too much. He never puts too much pressure on me."

The 21-year-old found the game faster than anything he has played and said it was great to score.

"The insides did some great work there, put it on a silver platter for me and all I had to do was show a bit of toe. The line seemed miles away but I managed to make it.

"It’s been a tough couple of years, on and off the field, but I’m glad I’m coming out of it. I was just enjoying it so much out there."

The Highlanders will head to Hamilton this week, to take on the Chiefs on Friday night in front of no crowd.

The Blues got their season off to a good start on Saturday, winning 31-16 against the Hurricanes in Wellington, after the home team led 11-7 at halftime.

The Chiefs were idle over the weekend and will be ready and willing for the Highlanders on Friday night. The Hurricanes will play the Crusaders in Christchurch on Saturday night.

■The Highlanders Bravehearts scored a try in the final minute to beat the Crusaders development XV 35-31 in a match at Pleasant Point on Saturday.

The lead changed many times and the Highlanders team scored with time all but up to win the game.