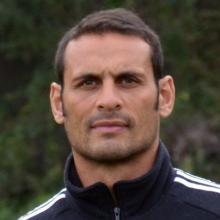 Ryan Nicholas
Some club coaches have hit out at the premier club draw, saying the draw is illogical and they may walk away.

But the Dunedin metropolitan council of rugby clubs says the draw was supported by the majority of clubs and it had to look after all clubs and all players in all grades.

The premier club season was set to start on April 10 with five rounds of the Speight’s Jug. This would be followed by a full round for the Gallaway Trophy.

There would then be quarterfinals, semifinals and a final on July 31.

Otago players would not be able to play in any of the playoffs as they prepare for the national provincial championship.

Club coaches held a meeting earlier this week at which it was clear some of them were not happy.

Harbour coach Ryan Nicholas said the season structure made no sense to him and if the structure remained he would quit.

"Last year’s season was short and sharp and that is what everyone wanted. Now we have a season where we come to the business end of the season and our best players are not going to be there," he said.

"There is no point of coaching. I’m just wasting my time. You work hard during the day, you go to training two nights a week, give up your Saturday. Then you come to the playoffs, the climax of the season, and you will lose all your best players."

Nicholas said players and other stakeholders carried out a survey after last season and more than 80% wanted just one round and have the Otago players involved for the whole season.

"Most guys have got other things going on. One round is enough for them. Those who want more rugby, most of them will be involved in rep rugby anyway."

The council wanted a 17-week season so all clubs would get home games — and money across the bar — and all players through the grades would get a decent amount of rugby.

Nicholas said other grades could simply finish at different times. If clubs had to survive on bar takings from home games then the club rugby model was simply broken.

"The real problem is the depth of club rugby. To replace guys you just have to go to your second team and you just end up weakening their team."

Nicholas suggested a festival of rugby start to the season for three weeks involving a game of three halves scenario.

University coach Peter McIntyre saw a solution by playing the Gallaway Trophy first so effectively flipping the season around.

"Most of the Otago guys really want to play in the finals for their clubs. And it would be good for Otago rugby to have those players there, playing in the heat of the finals," McIntyre said.

"We seem to be starting too late as it is. There is a lot of pressure on club rugby and the committee is trying their best. But I think flipping it round is relatively easy thing to do."

Kaikorai coach Roger Cotton described the decision made as unbelievable.

"It is just illogical. No other place in New Zealand does something like this. It is crazy," Cotton said.

"I’m driving an hour and a-half both ways, two nights a week to practise, and then Saturday and they turn around and do something like this."

He said he had no faith in the council making the decisions.

"There seems to be a real disconnect in some clubs between the coach and club delegates to the council."

The provincial season was set to start in early August but was yet to be confirmed and Otago coach Tom Donnelly wanted time with his players to prepare.

Council chairman Paul Dwyer said the council had received a letter from coaches about their concerns. They had replied to the letter.

The season had to be for all players from junior colts to premier grade. All grades would finish on July 31.

To change the draw meant some clubs would have their premier team out of the competition by mid June and the club would simply die as the premier team drives the club.

"We understand some coaches’ frustration, and the pressure they are under with an under-20 competition starting and then rep players being pulled out. But you can’t keep everyone happy," Dwyer said.

The council would be willing to sit down with coaches at the end of the season and discuss possible changes.

Richard Kinley is a joke! He is the GM of Otago rugby so affairs pertaining to the Council of Clubs surely must come across his desk. Otherwise it’s the other “Richard”, the one called Perkins. Such a cosy little old boys network, it disgusts me!