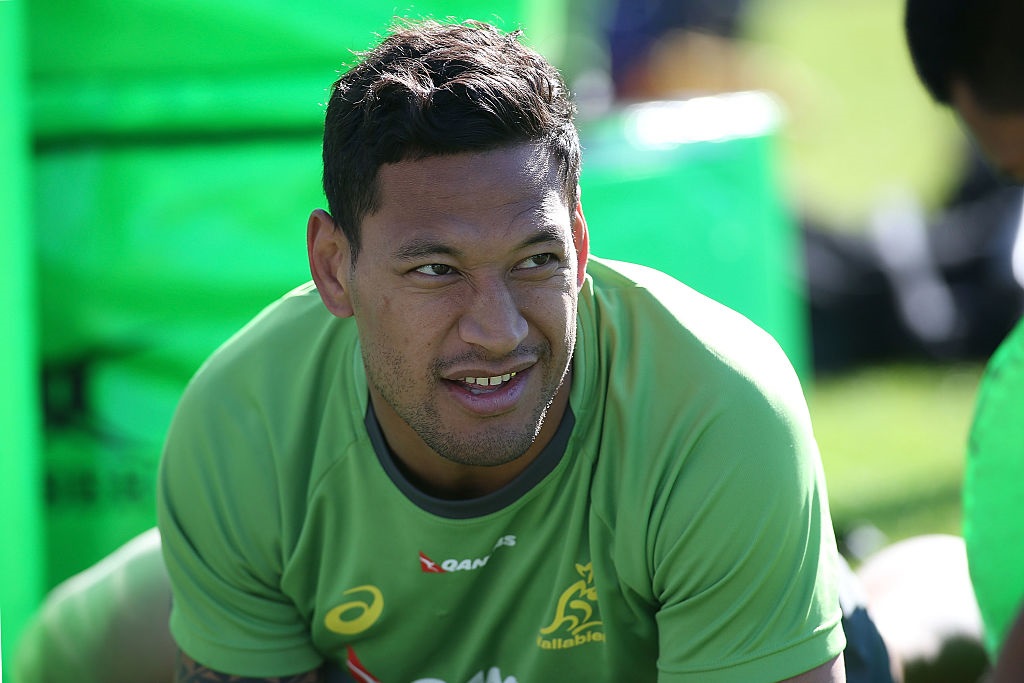 Israel Folau has launched legal proceedings with the Fair Work Commission against Rugby Australia and is seeking up to $A10 million in damages. Photo: Getty Images
Israel Folau's camp has hit out against GoFundMe's decision to shut down his online fundraising campaign, claiming there is a campaign of discrimination against the former Wallabies star and his followers.

But the fundraising platform said on Monday it was pulling the campaign and issuing full refunds to the more than 7000 donors.

"Today we will be closing Israel Folau's campaign and issuing full refunds to all donors. After a routine period of evaluation, we have concluded that this campaign violates our terms of service," said Nicola Britton, GoFundMe's Australia Regional Manager.

"As a company, we are absolutely committed to the fight for equality for LGBTIQ people and fostering an environment of inclusivity. While we welcome GoFundMes engaging in diverse civil debate, we do not tolerate the promotion of discrimination or exclusion.

"In the days since Mr Folau's campaign launched, more than one million dollars have been donated to hundreds of other campaigns, large and small, across Australia. Those acts of kindness are the heart of GoFundMe.

"Our platform exists to help people help others. Australians have shown themselves to be among the most kind and generous people in the world. We look forward to helping more Australians fundraise for causes they care about in the coming months and years."

According to the terms and conditions on the website, users may not attempt to raise money "for the legal defence of … intolerance of any kind relating to race, ethnicity, national origin, religious affiliation, sexual orientation, sex, gender or gender identity, or serious disabilities or diseases".

Folau wanted money to fund his legal battle against Rugby Australia, which terminated his $A4 million contract in May this year after he posted a biblical passage on social media stating that hell awaited "drunks, homosexuals, adulterers, liars, fornicators, thieves, atheists and idolaters" unless they repented.

A spokesman for Folau said the decision to cancel the campaign was very disappointing.

The campaign was in line with GoFundMe's terms and conditions, as well as all relevant rules and regulations, the spokesman said in a statement on Monday afternoon.

"Unfortunately, GoFundMe has buckled to demands against the freedom of Australians to donate to his cause," the spokesman said.

"There appears to be a continuing campaign of discrimination against Israel and his supporters."

Israel and Maria Folau. Photo: Getty Images
Since launching the appeal, Folau and his supporters have come under "intense scrutiny in the media", the spokesman said.

It's believed Folau's website was the target of a "sustained cyber attack" and there has been a "deliberate attempt to vilify" his New Zealand wife Maria - who re-posted her husband's online campaign - for supporting Folau.

These attacks have "hardened his resolve", the spokesman said.

Folau has launched legal proceedings with the Fair Work Commission against Rugby Australia and is seeking up to $A10 million in damages.

Folau was very grateful to the donors who "believed in good faith that their donations would contribute to his case against Rugby Australia", the spokesman said today.

More than 95,000 people had signed an online petition calling on GoFundMe to take down Folau's page, noting its purpose was against the website's terms and conditions.

One Nation NSW leader Mark Latham, who defended Folau in his maiden speech to parliament earlier this year, suggested GoFundMe's decision was an "excessive use of corporate power".

"During the SSM campaign, Lefties scoffed when I said the absence of Religious Freedom Protections would lead to a reign of terror against Christians. In all aspects of the Folau matter, it's easy to see what's happening," he tweeted.

When asked about the closure of Folau's account on Monday, Prime Minister Scott Morrison said: "I think that the issue has had enough oxygen."