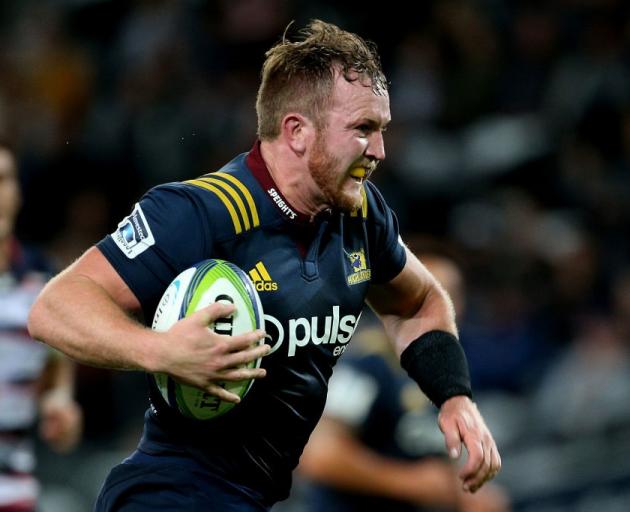 Gareth Evans. Photo: Getty Images
They are putting the old band back together.

Loose forward Gareth Evans will return to the Highlanders this season.

Evans’ return comes hot on the heels of news that experienced first five Marty Banks will don the colours again as well.

The pair were part of the side which delivered Super Rugby glory in 2015.

They came on as replacements during the final against the Hurricanes and teamed up again on another big night for the Highlanders two years later when the side edged the British and Irish Lions 23-22 in Dunedin.

Evans was with the Highlanders from 2014 until 2017 before shifting north to play for the Hurricanes.

At the top of his game he has an enormous work rate and the knack of popping up where he is needed.

He impressed during his debut season with the Hurricanes and was selected in the All Blacks wider squad.

Evans went on the 2018 northern tour to Japan and Europe and made his international debut against Japan.

His inclusion in the Highlanders squad will help fill the void left by the departure of Japanese loose forward Kazuki Himeno, who impressed during his debut season for the franchise.

Fellow loosie Teariki Ben-Nicholas has signed with Top 14 club Castres on a two-year deal, and Sione Misiloi has been linked to Moana Pasifika.

Clark would not be drawn on whether Otago prop Saula Ma’u’s development contract would be upgraded to a full contract. However, he did point out the massive Harbour Hawks front-rower was still recovering from an injury and had not played a lot of rugby recently.

Former All Black Nehe Milner-Skudder is off contract so there are some gaps out wide.

Highlanders coach Tony Brown told Stuff earlier this month the franchise was keeping an eye on the Naholo brothers Waisake and Kini.

If Waisake makes a Highlanders return, that would put another piece of the 2015 puzzle back in place.