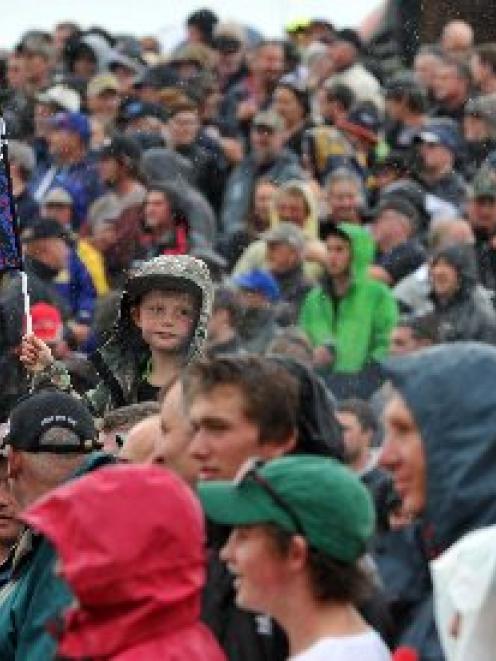 Fans watch the action as the Highlanders and the Crusaders clash in last night’s pre-season game at Waimumu. PHOTO: CRAIG BAXTER
Two minutes before kick-off, it started to rain.

But the 7500 people packed into New Zealand's newest rugby venue did not care.

Top-class rugby came to Eastern Southland last night and the crowd lapped it up.

And to make sure everyone went home happy, the pre-season game at Waimumu between the Highlanders and the Crusaders ended in a draw, 19-19.

The aptly named Fred Booth Park - Mr Booth owned the land the game was played on, beside the Southern Field Days site - was in good nick, although the rain made the ball greasy and hard to handle.

The rain stopped about midway through the first half and the game picked up in intensity and structure in the second half, as the Highlanders showed some nice touches.

Rugby royalty was there, in the form of Sir Colin Meads, and Highlanders chief executive Roger Clark labelled the game an outstanding success.

‘‘All these people here are rugby fans, rural rugby fans, so it is great that we can bring the game to them,'' he said.

‘‘They are going to come along to Rugby Park and Forsyth Barr Stadium at some stage this year, so it is great we can repay their loyalty.''

The Highlanders had done well commercially from the venture, he said. The franchise had an agreement to return to the field days and play another game in a couple of years.