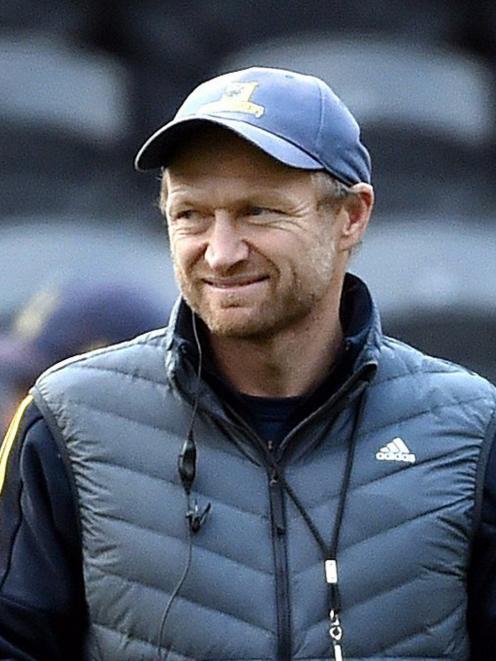 After the exit of nearly a full side of top players after the 2019 season, the broom has again gone through the organisation. Nearly a dozen players have moved on, though only Rob Thompson and Dillon Hunt would be considered regulars.

The biggest change is at the top with the departure of Aaron Mauger as head coach, who is being replaced by Tony Brown.

Brown is being helped by Clarke Dermody and new defence coach Shane Christie, while Riki Flutey is the skills coach.

Brown has talked about having to play differently from other teams. To do the same power model will simply not cut it against big, strong experienced sides which squeeze the life out of you.

Brown is a proud Highlanders man. He played more than 80 games for the franchise and is a highly regarded coach thanks to his attacking nous and tactical appreciation.

He has introduced some experience to the squad, which he felt was missing, by signing veteran lock Bryn Evans and prop Josh Hohneck.

Ash Dixon and Aaron Smith will co-captain the team.

The Highlanders do not have the depth of all-round talent of most of the other sides but that does not necessarily spell doom and gloom.

Brains have always been a wise asset for any side and this is where the Highlanders need to have the edge.

Playing smart will be the key for the side. And taking chances when they come along. Whether the side has the cattle to travel that path is the big question. And whether other teams will allow them is also a big unknown.

The tight five is not the strongest, but Hohneck is an asset and Daniel Lienert-Brown has plenty of miles on the clock.

Liam Coltman will keep Dixon honest, while Josh Dickson was one of the best locks in the competition before damaging his leg early in Super Rugby Aotearoa. Evans has the experience, which will prove invaluable.

The loose forwards are strong, but every side in this competition could say that. Liam Squire will be a man of interest along with Japanese loose forward Kazuki Himeno.

Smith is all set to become the most capped Highlander of all time. Outside him, if Josh Ioane can find the form where he has defences in two minds and is able to set up those outside him, the Highlanders should have a firing attack.

The loss of centre Fetuli Paea to a season-ending ankle injury is a blow, but there are plenty of options in the outside backs.

Why they’ll win it: they’ll run teams off their feet and have the experience for the tight moments.

Why they won’t win it: too many holes on the team sheet and a softness up front.