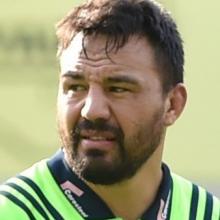 You would not know it, though.

The Highlanders hooker looked as if he had just emerged from a scrum during Wednesday’s press conference.

His right ear was bloodied and looking, well, a little nasty.

It is probably no different than the calloused hands of a builder or the tanned skin of a farmer.

But with talk in the media about how taxing Super Rugby Aotearoa is on the players, Dixon’s ear served as a visceral reminder of the physical strain players are under.

"I guess it is taxing but it is enjoyable," he said.

"We’ve been given a great opportunity after a pandemic that affected the world and we are the only country that is getting to play with our fans [watching]."

The text hovering below the surface is that somehow the local derbies between New Zealand teams are more physically demanding than games against Australian or South African franchises.

What the debate needs is some actual empirical evidence rather than opinion and suggestion.

Interestingly, only one team has won the week following a bye which suggests a rest is actually a disadvantage.

The Highlanders had a bye last weekend and will host the Blues at Forsyth Barr Stadium on Sunday.

Dixon is hoping the break will be beneficial.

"I’d say if you had to go eight straight against Kiwi teams it would be a tough ask.