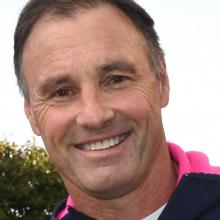 The agreement will enable the Highlanders to support the Dynaboars, who are based in Sagamihara city, in Kanagawa prefecture, as they manage their return to the Japanese Top League.

In a statement released this week, the Highlanders said they would provide assistance to the Dynaboars management and coaching staff.

The Dynaboars head coach is Greg Cooper, who has a strong connection with the Highlanders; he was their coach from 2004-07. He is assisted by Carl Hoeft who played 98 games for the Highlanders from 1997-2005.

"Japanese rugby has grown significantly in recent years and no doubt will continue to strengthen post the RWC.

"We view this agreement as a great strategic opportunity for both the Highlanders and Mitsubishi as we move forward in an ever-changing rugby landscape," he said.

The Highlanders had previously had ties with the Panasonic Wild Knights.

That had led to some Highlanders, including Hayden Parker, Richard Buckman and Ash Dixon, going to play for the Panasonic team.

Mitsubishi Dynaboars general manager Satoshi Ishii was delighted to enter into the rugby partnership contract with a Super Rugby franchise like the Highlanders.

"We have recently achieved promotion to the Top League after 12 seasons. However, we believe that it is important for us to be as professional as possible in the coaching and managing of our rugby to advance our team.

"Through this partnership with the Highlanders we are going to move our team toward achieving our team philosophy - through rugby, we share our dream and vision with all our people," he said.

The Dynaboars have signed former Highlanders James Wilson and Jackson Hemopo for the new season, which kicks off in January.

Former North Harbour midfield back Michael Little has also signed for the Dynaboars.