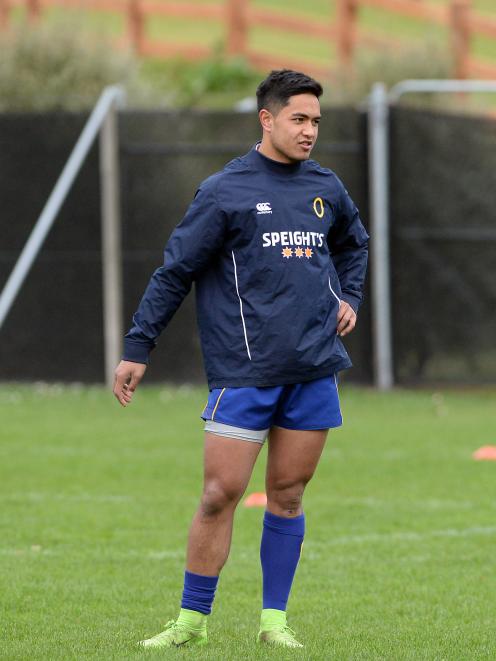 Otago first five-eighth Josh Ioane. Photo: Linda Robertson
He thought someone was pulling his leg when he got a call from the Highlanders coach but Josh Ioane is proving he is ready for the big show.

Ioane has slowly been climbing the rugby ladder over the past few years.

He started at school, then into age-grade teams and now into the environment of professional rugby.

The 22-year-old first five-eighth has played in all three games for Otago in the Mitre 10 Cup so far this season and has impressed with his composure and running skills.

Ioane, who went to King's College in Auckland before heading south for study and trying to improve his rugby, said he was enjoying his first year in the Otago jersey.

''I have loved every minute of this environment. My debut against North Harbour was awesome. It was good to have all my family there up in Auckland,'' Ioane said

''At this level, some say it is easier. You just do your job as everyone takes care of their job. But everyone is a bit bigger and faster. There is more pressure on to execute your skills properly.''

Ioane was the inaugural coaches' player of the year in club rugby this season. His club play was undoubtedly helped by time spent in the Highlanders.

It was a very unexpected call-up to the franchise.

''I looked at my phone one day and Tony Brown had texted me. I just went to my flatmates, ''which one of yous is playing a trick on me? Who is tricking me?'''

''Then I messaged around and asked 'is this really Tony's number?' It turned out it was.

''So I gave him a call back. He said come in for pre-season. He said just to come in for December for the three weeks. I gave it my best shot and it was hard, real hard. Then in February someone went down and I got a text to come in and I was there ever since.

''It was a great experience, definitely a level up from where I was. Just the professionalism, attention to detail, doing your job and the consequences if you don't.''

Ioane did not get on the field during the competition although he played the practice game in Timaru in July against the Crusaders.

The Southern club player is signed with the Highlanders and Otago next year so his future is secure for the next 12 months.

Ioane though know if he wants to win his spurs in the No10 position he has to become a better goal-kicker. He kicked just one from five against Manawatu last Saturday although some of them were hard and he did hit the post.

He had never kicked before this year but is giving it his best shot.

''It has been a challenge. I am working on it ... I'm still learning a lot. Hayden Parker and Tony Brown helped me a bit. I did not do too bad with Southern this year. I'm still confident I've got the ability to do it this year.

''It is a lot to do with process and not worrying about the outcome. Once the ball has left your foot there is not a lot you can do. Just focusing on the routine and the process is what I have been taught.

''It is the main work-on for me; that is what the coaches see. The team needs the points and as a 10 that is your job, especially at this level.''