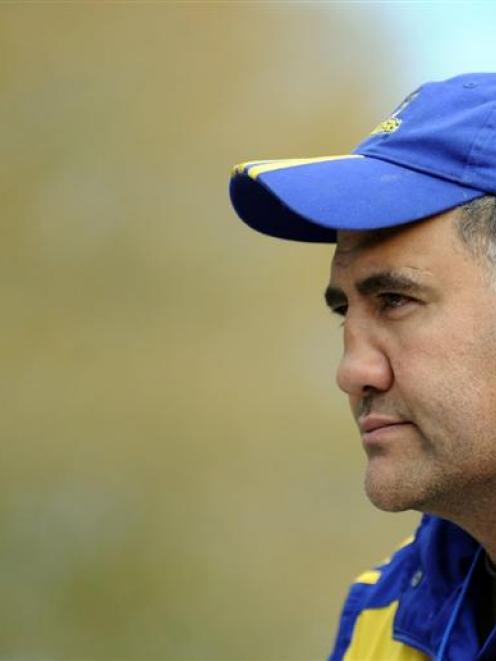 Jamie Joseph. Photo by Peter McIntosh.
Coach Jamie Joseph says competition for places should make the Highlanders better, although time is running out to get everyone fit.

The Highlanders are just 12 days away from playing their first game of the new season, and after a 38-36 loss to the Chiefs in Queenstown on Saturday, they know the chances of putting out a full-strength team are slim.

Encouragingly, key forwards Josh Bekhuis and Jamie Mackintosh made a fleeting appearance on Saturday, though it was unplanned, while new midfielder Phil Burleigh looked at home.

The two forwards played in the last quarter of the game in Queenstown, but taking a glass half-empty view, Mackintosh was forced on as two other props were injured during the game, and Bekhuis did little of note.

Burleigh played all but the first five minutes of the match as Glenn Dickson was forced off with a sprained wrist.

Joseph said there should be tough competition for places in his side, when all players were fit. But when that would happen was anyone's guess.

"We threw Josh [Bekhuis] and Whopper [Mackintosh] on and it was unplanned but we had to give them 10 to 15 minutes.

"We had players playing most of the season last year and hopefully, if everyone is fit, we won't have to do that. There is competition in certain places and relatively light in other places.

"If everyone is fit and available, then it is going to be a real hard competition for spots. The thing is the injuries we have are injuries to key guys."

Joseph was unsure whether he could field his first-choice team against the Blues in the final pre-season game in Auckland on Friday, as a third of the team was injured.

He was pleased with the resolve of the team on Saturday after the Chiefs got off to a flier, leading 24-5 after 20 minutes.

The Highlanders' defence was poor in the first half, but they scored the final three tries of the game.

Considering the injuries in the backline, Joseph was pleased with the effort of the men out the back.

For Burleigh it has been an eventful last few days. Last week he played 40 minutes in a pre-season game for the Chiefs, as he was a member of the wider training squad. But he was contacted on Thursday about joining the Highlanders.

He said it was a no-brainer and jumped at the chance to become a full Super 15 player.

He flew down with the Chiefs on Friday from Hamilton, and switched camps on his arrival.

"The boys were giving me a bit of grief on the plane but once I got here I was met by someone from the Highlanders and that was that," Burleigh said.

"Chris Noakes bought a book and had written down all his notes and I sort of learned off that. I'm sure I will learn the moves in the next couple of weeks. Well, I'm going to have to."

Burleigh (25) is the son of former Canterbury inside back Wayne Burleigh, and this is his third year in the Chiefs wider training group.

He was keen to get involved with the Highlanders and contribute as much as he could, and started off well by scoring a try on Saturday.

"It is an opportunity to showcase myself and show what I can do in the next six or seven weeks."

He now has to find a flat in Dunedin and transfer his thoughts and belongings to southern climes.

Joseph said at the moment no other player was going to be drafted into the midfield, as the cupboard around the country was pretty bare.

Prop Ma'afu Fia pulled a hamstring and came off in the first quarter of the game, while front-row colleague Chris King left the field with a tight groin.

They would be assessed in the next couple of days.