Tough to find quality No 10 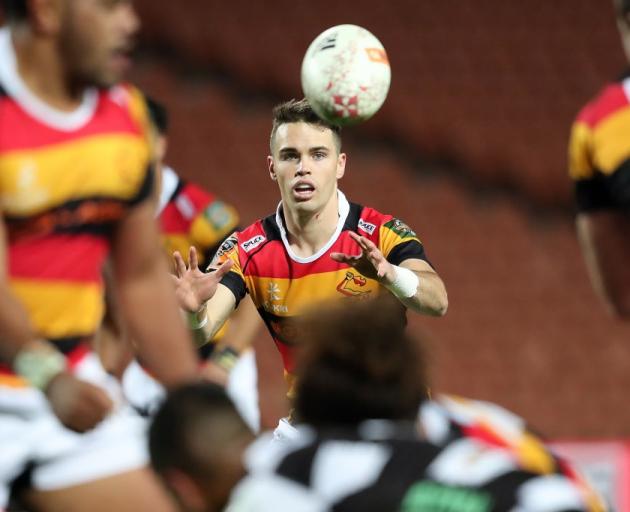 Fletcher Smith has been good in recent weeks for Waikato. Photo: Getty Images
The Highlanders are on the hunt for a third first five-eighth and the Mitre 10 Cup is their hunting range. So can they catch a roaring stag or is it only runts that can be bagged in the national domestic competition?

Rugby writer Steve Hepburn takes a look around the Mitre 10 Cup and sees if it is more rocks than diamonds.

Verdict: Not a bad player, runs reasonably well, good in the tackle and rugged enough.

Chances of heading south: Slight. Born in New Zealand but lived most of life in Australia. Played for the Rebels last year but appears to be a free agent at the moment. He's an Australian really. Can they be trusted to pilot the Highlanders around the paddock?

Verdict: Promising player who looks to have a bit of time, nice goal-kicker

Chances: Zero. Has signed for the Blues to be the 25th or so player to attempt to be the next Carlos Spencer. Good luck, Harry.

Verdict: Looks all right, has the fundamentals and good goal-kicker

Chances: It is up to him. He is signed by the Highlanders after an average season with the Blues. Is a solid enough performer.

Verdict: A solid operator who does most things right. Does not get the pulse racing.

Chances: Likes to travel having played for three sides in New Zealand, in England and South Africa. Not up to Super Rugby class.

Verdict: Started poorly at fullback but as Waikato has turned it around so has Smith as he donned the No10 jersey.

Verdict: How old is he? Forty-five? Delany is actually 36 and still plays all right. Good goal-kicker, too.

Chances: Was at the Crusaders last year and if he is still wanted there then will head back to Christchurch. Not a bad back-up but lacks real class.

Verdict: Another young player who is said to have some real talent. A bit hit-and-miss though.

Chances: Locked in with the Chiefs for next year.

Verdict: Black is just back from a horrific knee injury and looks class. Malcolm is a young guy who has probably reached his level.

Chances: Black is with the Blues while Malcolm is not a goer.

Verdict: Perofeta has some talent but may be slightly overrated. Ditto for Matoe.

Chances: Perofeta is with the Blues while Matoe is too green.

Verdict: Has improved over the past 18 months but has the advantage of playing behind a top pack.

Chances: Signed with the Hurricanes.

Verdict: Hunt is growing in skill and is a quality player while O'Malley looks good in everything he does.

Chances: Hunt is with the Crusaders and O'Malley, originally from Maniototo, is just starting out.

Verdict: Looks to have time and poise though it is easy behind a big pack

Chances: Cameron is likely to be one of the 600 players the Crusaders and Canterbury stockpile every year.

Verdict: On the improve and a good runner.

Chances: Locked in at the Highlanders next year and has some class.

Verdict: Closer to 40 than 30, still has some talent

Chances: Not the worst player one could sign. But best years well behind him.

It is like looking for a needle in a haystack. Looking for whitebait on the first day of the season. Let's be honest - there is not a lot out there. The Highlanders may just have to go with someone like Fletcher Smith, someone they know.

Anyone with any experience is playing overseas on big money. And their best years are long gone.