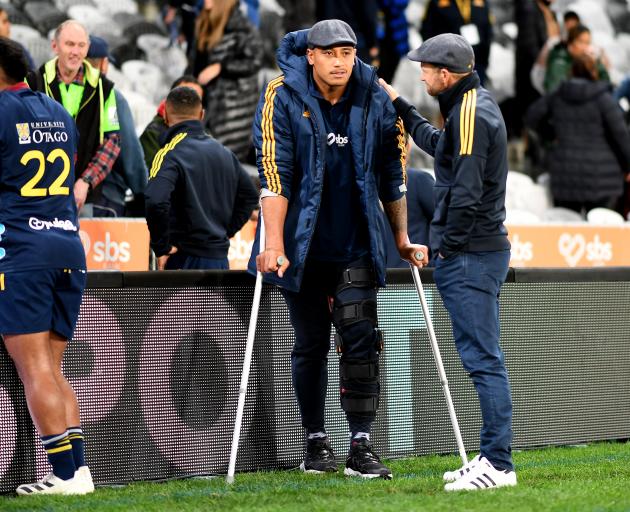 The Highlanders have broken their duck but they have also broken a couple of players.

The 37-17 win against Moana Pasifika in Dunedin on Friday night came at a heavy cost.

All Black loose forward Shannon Frizell limped off with a tear to his medial collateral ligament. Lock Manaaki Selby-Rickit hobbled off 25 minutes later with the same injury.

Nobody was available to comment for the Highlanders yesterday, but coach Tony Brown told media on Friday night the pair were probably out for the season.

"We’ve lost those boys for the season, by the looks," he said.

"Both of them MCLs.

"You can’t replace those two guys. Shannon was playing the best rugby he has played for a long time, so he’ll be very disappointed that potentially his year is done."

The pair will be assessed today.

The Highlanders started the season with six consecutive losses, but the win has lifted them into 10th place and they are just three points adrift of the top eight.

They play the Hurricanes in Dunedin on Saturday in what shapes as an important game for both sides.

The Hurricanes suffered a tense 24-21 loss to the Crusaders in Wellington on Saturday night and are in eighth place with 11 points.

All Black and Hurricanes captain Ardie Savea was critical of the officiating in a post-match interview with Sky.

His side was filthy it did not get a late penalty when the Crusaders appeared to have infringed in a 5m lineout.

"As a leader I like to put pressure on, and demand from the officials and making sure they’re doing everything they can to get these calls right," he said.

The Blues recorded their sixth straight win with a 25-0 shut-out of the Chiefs in Hamilton.

They blended some marvellous defence, which kept the Chiefs scoreless for the first time in their history, with some wonderful attack.

The Blues scored a 80m try when winger Mark Talea jigged his way past a defender and got into space.

Rieko Ioane loomed up on his shoulder and would have scored in the corner had it not been for a desperate ankle tap.

The Blues are in a share of second place with the Crusaders on 27 points from seven games.

The Brumbies (31 points) continue to lead the competition. They beat Fiji Drua (six points) 33-12 in Brisbane on Saturday.

The Rebels (10 points) beat the Force (13 points) 22-21 in Perth on Friday, but will have to work on their tackle technique.

Matt To’omua was yellow-carded and team-mate and Otago midfielder Ray Nu’u got a red card after both contacted the head of their opponent.