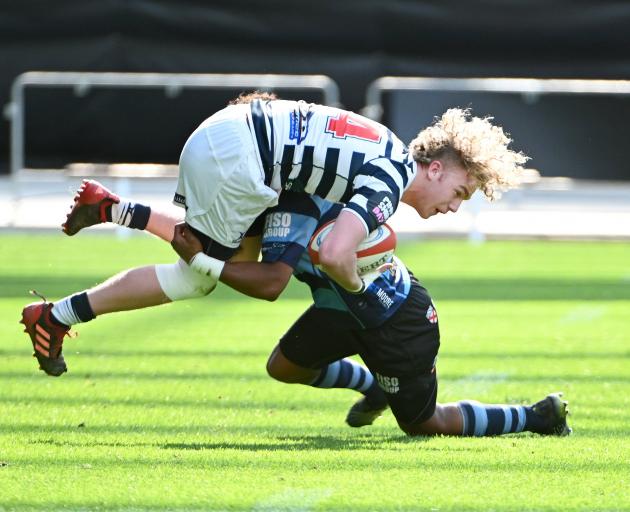 Nelson College spent most of the final 10 minutes camped on its line, desperately holding on as Otago Boys’ High School staged a comeback in the South Island First XV final at Forsyth Barr Stadium on Saturday.

Lionhearted No8 Semisi Tupou Ta’eiloa crashed into the defence countless times and was held up over the line at least twice during the game.

First five Finn Hurley had led the fightback when he skipped across following a quick tap, and he set up winger Aaron Morrison with a wonderful counterattack and even better offload.

But the home side had left itself with too much to do. Nelson held on to claim a 27-19 win.

The visiting side had the better of the first half.

It struck early, and it was an awfully impressive opening. Nelson held on the ball for phase after phase until lock Hunter Leppien got a lovely short pass off to prop Ben Lefale, who charged to the line from 20m out.

First five Cooper Grant, son of former Black Sox pitcher Marty Grant, added the conversion and a couple of penalties to give his side a 13-0 lead at the break.

Late in the half, the home side was a little unlucky not to be awarded a penalty try.

Otago Boys’ was steamrolling towards the line but Nelson sacked the maul. Lock Tuterangi Stone-Williams got a yellow card for his sins but stopped the try.

Otago Boys’ tried the maul again early in the second spell and marched 40m. Ta’eiloa peeled off and threw himself at the line but was stopped.

However, hooker Alex McLaughlan got across from another drive a few minutes later to get his side on the board.

All that hard work came undone at the other end.

Nelson strung some phases together and kept probing until fullback Nic Sauira slipped over.

Nelson stretched out to a 27-7 lead when Netani Baleisomosomo reached over to score following a long build-up.

The game looked lost for Otago Boys’ but some magic from Hurley set up a tense finish.

He will be ruing a couple of uncharacteristic clunked attempts at goal but he had a fine match.