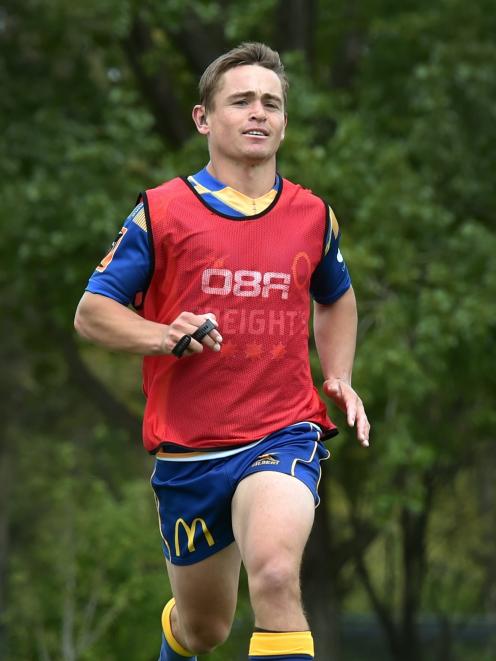 Training at Logan Park earlier this week is Otago inside back Jono Hickey. PHOTOS: PETER MCINTOSH
Jono Hickey is making up for lost time.

Hickey (29) admits if you asked him two months ago if he would be playing in the Mitre 10 Cup — and for Otago, of all sides — he would have said "no chance".

But it has happened with Hickey, who has played 32 games for Auckland, fast becoming a key player for Otago as it heads into the business end of the season.

Hickey, a halfback who moved into first five-eighth for last Friday night’s win over Northland, has played very few games over the past 18 months.

He blew his shoulder at the start of last year — splitting his rotator cuff and suffering a labral tear.

Then any hope of playing a decent season in Auckland club rugby went up in Covid-19 smoke.

"I was back in Auckland throughout lockdown and playing for my club up there, Grammar-Tech. We got through about five rounds when Covid hit again and the whole competition got stuffed really," he said.

"I was rehabbing some injuries and I had a missed call from Michael Collins — I rang back and he asked how was the body. I then had a chat with Sass [Otago coach Tom Donnelly]. He said ‘come down and get fit’ and here I am. It’s awesome."

He had no connection with Otago but was enjoying the southern hospitality.

He left Auckland in 2017 to for a year in for the Toyota Shokki team in Japan.

He then went to Wellington but his shoulder injury got in the way and he never got on the paddock for Wellington.

"It’s been a bit funny over the last 18 months. Just not sure now how the body would have scrubbed up. I’ve probably played seven or eight games of rugby in last 18 months. Had the shoulder, then Covid, and then Covid again."

He missed the game and what it brought.

"I get real nervous on game days. For some reason I missed that, missed that feeling. I’m a bit better now. But back in the day I got terribly nervous. Used to overthink things, play the game 10 times in my head. I still get it — you never want to let your team mates down."

Hickey was also a handy cricketer who played for Northern Districts at first-class level. A left-handed batsman, he played more than 20 limited-overs games for the Knights.

"It has sort of fizzled out — a couple of niggles stopped me. I did my shoulder, spent a time in Japan. By the time I finished playing I was not scoring runs."

Hickey enjoyed his game in the No10 jersey last week.

"I had a little bit of experience playing there for my club this year. I was pretty nervous how I would go. I was just happy to get a result. I was never going to be anywhere near Josh Ioane."

As for the future, he does not know. His wife, Jordan, is back in Auckland.

"My wife is running the cutter for us. She is very supportive. Hanging on to the dream as long as I can. It is cliche but I’m just genuinely trying to take it a week at a time.

"I want to keep playing as long as I can. Mentally, I feel young ... If you has asked my two months ago would you be playing Mitre 10 Cup for Otago I would have said no chance. So things change pretty quickly."