Ioane quick to credit others for his success 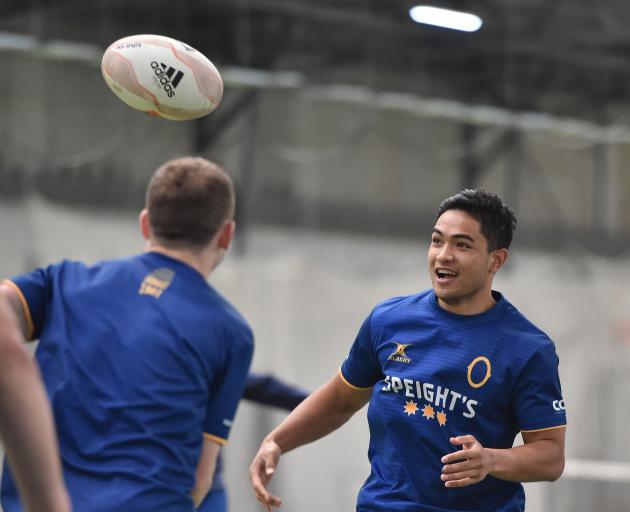 Otago and All Black first five-eighth Josh Ioane looks to get involved in a game at training at the Edgar Centre yesterday. Photo: Gregor Richardson
Otago in 2017, Highlanders last year, All Blacks this season.

What can Josh Ioane do next season after a whirlwind couple of years in which he has gone from bench player for Otago to wearing an All Blacks jersey?

It has certainly been a quick rise for the first five-eighth, who was back at Otago training yesterday after an impressive 40 minutes for the All Blacks on Saturday in the big win over Tonga in Hamilton.

Ioane said it was a great experience for his family.

''I was never told how long I would be on. Halftime, they told me I was on. When they said that the nerves really came on. But nerves just come with a game like that.''

Ioane, who was watched by family and friends and gave his All Blacks jersey and cap to his dad, had a dream start in the black jersey.

His first touch was the kick-off for the second half, which was caught by winger George Bridge, who ran away to score.

''I think I am getting a bit too much credit for that. Doing that was just doing my job.''

Ioane (24) said the game being played during the day meant he did not have to sit around all day worrying about the match.

He was on the bench in the test against Argentina in Buenos Aires but did not get on.

''It was a tough pill to swallow in going to Argentina and not playing. But like the coach has been saying - the jersey doesn't owe you anything. I learnt that the hard way.''

Ioane came to Dunedin from Auckland to study and was a slow burner, playing well in club rugby for Southern but playing in other Otago teams before being offered a chance to train with the Highlanders at the end of 2016.

''It has been really quick. This time two years ago, I was debuting for Otago. Highlanders last year, All Blacks this year.

''A lot of people have helped me along. [It] has not just been me.

''It all started with the Highlanders in pre-season. That was good for a change of mindset that I wanted to play rugby fulltime. Just able to learn off Lima [Sopoaga] and Banksy [Marty Banks] for a couple of years. Then Lima went overseas and had an opportunity then.

''So yeah, you have to be in right place at the right time ... and just having a growth mindset.''

Now it is back for Otago, which is coming off a good win over Taranaki.

''I love playing for Otago and they had a good result.

''I was on the plane and I could not watch it. As we were coming down, I was searching for bars, though I'm not sure that is legal. I managed to find it, turned the game on and caught the last five minutes.

''It was a great win and all the boys really fronted.''