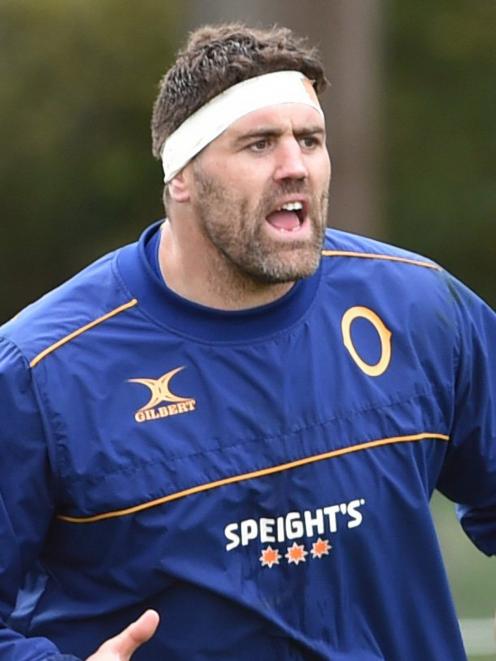 New Otago prop Jamie Mackintosh. PHOTOS: GREGOR RICHARDSON
Otago has rung the changes as it faces up to what will be a stern examination from Wellington in the capital tomorrow.

Otago has brought in more experience to its pack as it looks to combat what is bound to be a physical test from a Wellington side still bruised from an extra-time defeat to Canterbury last Saturday.

Prop Jamie Mackintosh will play his first competitive game in New Zealand in exactly five years when he starts at loose-head prop for the blue and golds.

MacKintosh played his final game for Southland on October 10, 2015 when it lost to Canterbury in Christchurch.

He moved to France for three seasons and then spent some time in the United States before moving back to New Zealand earlier this year.

The 35-year-old linked up with Otago and is the side’s scrum coach but is still able to play.

George Bower had a good stint in last week’s loss to Hawke’s Bay.

Mackintosh’s experience in the pack and around the field will be valuable for Otago.

After playing half a game for the Otago development side last Saturday against Southland B, lock Josh Dickson is straight back into the starting team.

Dickson is a quality lineout forward who has played more than 50 games for Otago and his aerial presence is a real asset for the side.

His fitness — he has missed three months after breaking his leg in July — may be an issue but lock Will Tucker, who makes way for Dickson, is on the bench.

Dylan Nel has moved to the openside flank with Sione Misiloi, who made his return from a broken foot last week with an appearance off the bench, starting at No8.

Liam Coltman will start the game at hooker as Ricky Jackson moves to the bench.

Otago lock Josh Dickson at training at Logan Park yesterday.
In the only change in the backs, Josh Timu gets a run at centre while captain Michael Collins is moved to fullback. Freedom Vahaakolo goes to the reserves.

Otago coach Tom Donnelly has opted to have six forwards on the bench.

Samuel Fischli and Sean Withy will cover the loose forward positions and will be expected to make a presence when entering play.

Jono Hickey, who has joined the squad to add some experience at halfback, is in the reserves and may get his first run for Otago.

Wellington has a potent backline and the All Blacks have released Peter Umaga-Jensen to Wellington for the game.

Former Otago and Highlanders back Trent Renata starts the game at fullback while Taine Plumtree, the son of the All Black assistant coach, gets his first start at this level.

The match is for the Mike Gibson Memorial Trophy, which is held by Wellington.

The hearing finally took place yesterday but the penalty is yet to be signed off.

Otago did not select McDowall for tomorrow’s game against WellIngton.