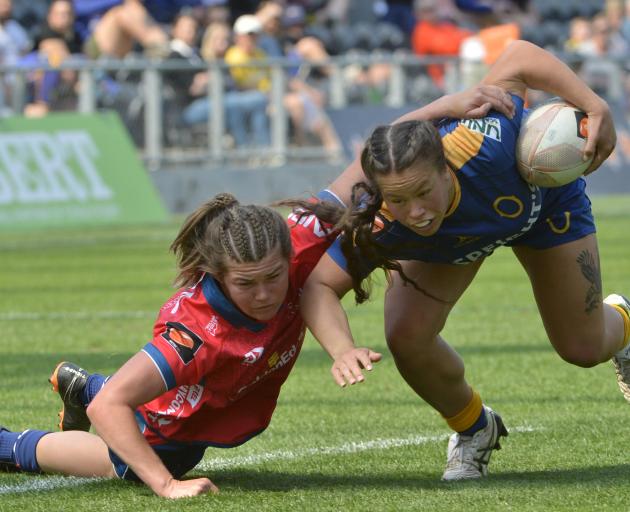 Tasman blindside flanker Tamara Silsock tries to drag down Otago second five-eighth Teilah Ferguson during their Farah Palmer Cup semi final match on Saturday. Photo: Gerard O'Brien
Otago has secured a home venue for the Championship final with a flawless effort in the semifinal against Tasman in Dunedin on Saturday.

The home team had too much attacking flair and pace out wide and dispatched its opponent 64-10.

Hawke's Bay prevailed 46-31 against Northland in the other semifinal.

Spirit coach Scott Manson said to win a semifinal by more than 50 points was quite an effort.

"Getting that ball wide has been the key for us all season and I'm assuming it will be next week as well," he said.

First five-eighth Rosie Kelly was instrumental in the mammoth win. Her attacking instincts, pace and confidence meant her side was always probing for a gap and very often found one.

She skipped over for two tries and slotted seven conversions in a 24-point haul, as well.

"It was a massive game from her. And she played quite well at No 9 as well [when she shifted there part way through the second spell]."

Otago opened the game with a threatening attack which carried it deep into Tasman territory.

The visitors had an opportunity to clear but muffed the exit with a knock on. Spirit halfback Rosie Buchanan emerged from the back of a scrum stuck in reverse and threaded her way to the line for the opening try.

No 8 Greer Muir barged her way over from close range after some more wonderful lead-up work.

The Spirit led 21-0 and was playing sparkling rugby. Tasman barely touched the ball in the opening 20 minutes.

Just crossing the halfway line was a mighty achievement in the context of the match.

It did have the superior scrum but was unable to use that platform to generate any momentum.

Otago released the pressure valve briefly with a knock-on about 35m out from its own line.

The home side had to do some tackling for a change. But once it got the ball back, midfielders Teilah Ferguson and Amy Du Plessis made some telling runs and Kelly crossed in the corner.

She nailed the sideline conversion to send her side into the break up 35-0.

The Spirit closed on the half century with tries to flanker Morgan Henderson and fullback Sheree Hume.

The milestone was brought up in style. Du Plessis sliced through and Hume got on her shoulder to carry the move on.

Replacement back Cheyenne Cunningham provided the quality finish in the corner.

The Mako managed two moments of joy. Sydnee Wilkins slipped her marker to score in the corner and fellow winger Rebecca Kersten scored in the final moment of the match.

The final against Hawke's Bay will be played next Sunday at 12.05pm, at Forsyth Barr Stadium.