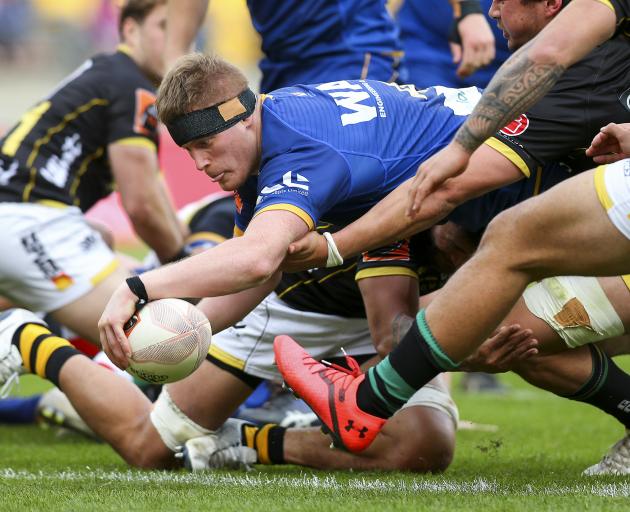 Otago lock Jack Regan scores a try during his team’s round five Mitre 10 Cup match against Wellington at Sky Stadium in Wellington on Saturday. PHOTO: GETTY IMAGES
Otago hung around and in the end got the box of chocolates.

The blue and golds scored a try in the 78th minute to beat Wellington 35-34 in the capital on Saturday and with the win has given its season a timely boost.

The side nearly blew it at the end as it lost the ball twice in the final couple of minutes but managed to get a turnover and clear the ball for victory.

The match see-sawed all game but it always looked as though Wellington would have enough. When Wellington halfback Kemara Hauiti-Parapara went over to score with 20 minutes left, his team went ahead 34-23 and the victory appeared to be there for the taking.

But Otago rolled its sleeves up and got the job done.

Otago coach Tom Donnelly said the win was a tribute to the way Mike Gibson played.

"We had a presentation from the Gibson family before the game and they talked of the way he played the game — never giving up, always playing to the final minute," Donnelly said.

"And that is exactly what we did.

"The attitude of the guys was outstanding. They got stuck in and never took a backward step. The result was a pretty special one," Donnelly said.

Donnelly praised the Otago set piece which gained the ascendancy as the game went on while the lineout also was assured. The return of experienced lock Josh Dickson helped secure the ball.

The match was one in which neither side could get on top. Part of that was due to both teams struggling to control the ball when it was receiving the kickoff after scoring.

Donnelly said that was something to work on and that contributed to a game in which neither side could get too far ahead of the other.

The Otago scrum went well while the loose forward trio did not back down against a strong Wellington combination.

Otago had scored early through hooker Liam Coltman via a lineout drive replying to a Trent Renata five-pointer.

Wellington looked dangerous at times but errors occurred at the wrong time for both sides.

Otago scored some nice tries and when Vilimoni Koroi scored his second after a slick backline move, Wellington led just 34-28 with 13 minutes left.

Then Otago pressed from a scrum 5m out. The ball went into the middle of the field and Dylan Nel made a burst. The ball was ripped from his grasp but it bounced up to Otago lock Jack Regan and the big Irishman could not be stopped from a couple of metres out.

Regan was part of a solid Otago forward effort, while all the backs had their moments, with centre Josh Timu defending especially strongly.