Rugby: How the game has changed 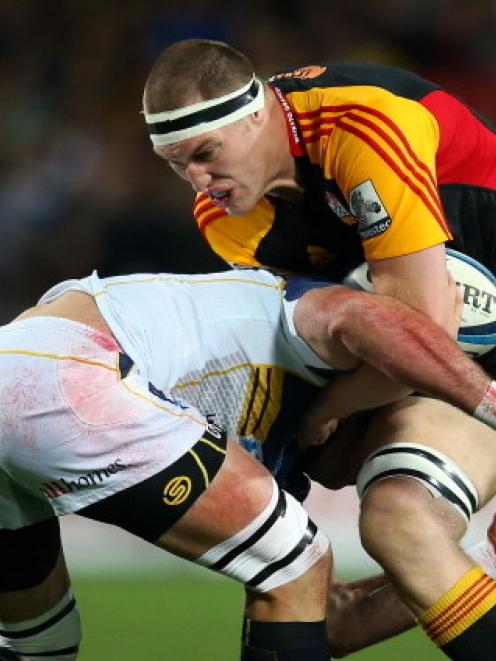 Chiefs lock Brodie Retallick tries to break the tackle of a Brumbies defender during the Super Rugby final at Waikato Stadium in Hamilton on Saturday. Photo Getty Images
With the most recent edition of the Super 15 having wound up at the weekend, ODT Online rugby contributor Jeff Cheshire casts his mind back to the 1998 final and looks at how the game has changed in the intervening years.

It is amazing how much rugby has changed over the past 15 years. Every year the game gets a little more technical and a little more structured, so much so that the game we know today is a vastly different one to that played in the 1990s.

Last week, Sky Sport played a handful of old Super Rugby finals, each of which made for interesting watching and showed just how the game has developed in recent years. Perhaps the most interesting of these was the 1998 final, the cliff-hanger where the Crusaders toppled the two-time defending champion Blues with a late try to James Kerr.

The breakdown was the most significant and most obvious difference. While in 2013 it has become an area so technical and ambiguous, in 1998 it was a far simpler affair. Players were diving in off their feet and joining from all sorts of angles, hands were being used to clear the ball and most crucially, rucking was still in the game.

It was that last point that made the game work this way. If a player was to dive over the ball, they would be rucked out of the way to prevent them from constantly killing the ball, rather than having to stop the game for a penalty. In fact the only offence consistently penalised at the breakdown was for not releasing the ball on the ground.

Some would say that the rucks in this game were a mess by today's standards. But it certainly made for a better game to watch, one where the breakdown was not such a lottery and teams were not able to simply rack up points from holding on to the ball and waiting for the opposition to make a mistake.

Another clear difference was in the less-competitive attitudes at scrum time and consequently, the fewer scrum resets. In today's game this has become a real problem, as everyone is using the scrum to try to get one up on their opponent and if they can win a penalty. All this results in is a whole lot of scrum resets and kicks at goal from scrums being under pressure, which really is not doing anyone any good.

In the 1998 final the scrum was simply a way to restart the game. There were a couple of occasions where the Blues pack tried to put a decent shove in, but in general both teams stopped pushing once the ball had been won. If it collapsed and the ball was able to come out, the referee would let play continue rather than dish out a penalty which again made for more rugby being played. There were also no engagement calls, with both packs going down together and figuring out themselves when to go.

It definitely made for a better game and there were some points the current law-makers could take from this, especially regarding the way the scrums were officiated.

Rugby these days seems to be built on the back of a strong, organised defence. Everyone has a place to be and everything is thought through so extensively that it is hard to break through these defensive lines.

In 1998 this wasn't the case. The players still tackled well and hard, but there weren't the same systems in place to make sure there was always a man plugging every gap. Naturally this created more gaps in the defence and made for more attacking rugby.

As a follow on from the last point, the use of forward runners off the ruck was more or less non-existent. The idea of using forward runners is to try to get some go-forward ball and to draw the defence in to create more space out wide. In having forwards running narrow channels, the defence is unable to fan out and cover the entire field as effectively, which means teams can look to move the ball to exploit the gaps wider out.

But with the defences being less organised, there isn't such a need for this. The backs saw far more ball, as both teams looked to play a more open game, throwing the ball around and put players into gaps, rather than trying to initiate contact. Again, it made for a more exciting game with far more action and unpredictability involved in the game.

So How Would They Match Up?

While the 1998 teams probably played a more attractive style of rugby, in reality they would most likely struggle against a modern-day team, even with all things being equal. A team from 2013 would just be too organised and would be too clinical for a team of 15 years ago. They would grind their opponents down, wearing them out by forcing them to tackle and making sure they play the game in their own half. The dominance the today's teams would have at set-piece too would make it for the teams of yesteryear to compete.

It is amazing how much a game can change in 15 years and it certainly makes you wonder where the game is headed in its 15 years. Will we continue to head down the current path of looking to gain an upper-hand in every aspect of the game, one that will surely lead to the destruction of the game should it progress too far? Or will there be a new game style favoured, perhaps one of years gone by, or even something new that hasn't been thought of yet? Every era has seen the game played in a different way and it isn't hard to imagine the game changing drastically again and again. How it will change is the question, only time will tell.