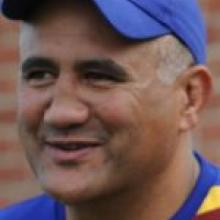 Jamie Joseph
Highlanders coach Jamie Joseph has paid tribute to the tenacity of his side, saying the team just dug in when under attack late in its game against the Crusaders.

The great season continued for the Highlanders on Saturday night when they upset the Crusaders 26-18 in Nelson, picking up their seventh win of the season and moved into fifth position on the Super 15 table.

But any talk of playoffs has been quickly shouted down by Joseph, who is looking no further ahead than Friday night's game against the Blues, at Carisbrook.

The victory on Saturday was based on some clinical work on attack and strong defence against a spluttering Crusaders side.

The Crusaders laid siege to the Highlanders tryline in the dying stages but simply could not break through a wall of defenders.

"That last 10 minutes just reflected the tenacity this team has. They broke us a couple of times but we scrambled well and just didn't give in," Joseph said yesterday.

"To be honest, the guys played their hearts out. They just showed complete commitment and physically are pretty buggered. We still missed a few tackles but managed to get back and grab them, however, and collar them."

The Highlanders were superb at the breakdown, pushing the Crusaders around and never taking a backward step.

Without the likes of Dan Carter, Richie McCaw and Kieran Read, the home side looked vulnerable throughout and suffered a leadership vacuum the longer the game went on.

"We just played pretty clinical rugby at times in that second half.

We played a bit more possession and managed to pick up a couple of penalties," Joseph said.

"Sure, we didn't start that well but that just shows it is an 80-minute game. I think the team has the ability to readdress things and do its own appraisal of its abilities. The confidence you get from winning helps the guys carry on through adversity.

"I've been saying it for a while now but this team has the ability to beat anyone, on its day."

Although the Crusaders had some key players out, and then lost Andy Ellis and Brad Thorn to injury in the first half, the Highlanders were also without a few key players such as Adam Thomson and Jimmy Cowan.

But Joseph was thrilled with those who stepped up to fill the gaps.

"We never had any doubt those guys would come in and do the job. They showed this team is not just about a couple of key players.

Look at someone like John Hardie. He had four weeks playing club rugby, which has really helped him, and came in and played outstanding."

It was a huge turnaround for the Highlanders after the Crusaders beat them 44-13 at Carisbrook just over a month ago.

Revenge was not a huge motivation but it was more about playing better than last time the sides met, Joseph said.

Joseph did not want to signal out any player above the other, and said it was way too early to think of playoffs.

"Were just taking it one match at a time. Every game is a biggie for us now."