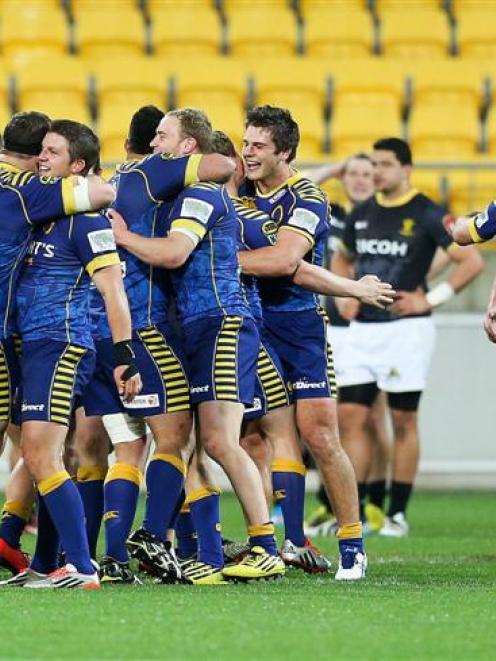 Just how amazing was the finish to this game? Otago, after having had almost no ball for the entire second half, somehow managed to pull in a 36-23 scoreline in the space of a couple of minutes.

Matt Faddes, Tei Walden, Tom Franklin and Hisa Sasagi were all influential in both tries, while Fletcher Smith's nice inside ball to Franklin was well-delivered. They kept the belief and the old saying that it only takes 30 seconds to score a try proved to be fairly accurate, give or take a few seconds.

No ball, no field position, but gutsy defence

The fact that Otago were even in with a chance to win this game is quite amazing. In the second half they had virtually no ball and seemed to play the whole game in their own territory. Wellington kept coming at them and forced Otago to make a mammoth 186 tackles, more than double that of their opposition.

Granted, Otago missed a fair few too, but they scrambled well to ensure the damage of these misses was limited. The defensive line got up fast and showed urgency to cut down the space Wellington had to work with, often forcing a mistake to negate the threat. Their strong first half allowed them to remain in touch throughout this period, then when their chances came, they took them and that was the ball game.

Otago continued with the more direct game plan they implemented against Auckland and it is becoming obvious that it is the best way for them to play. It sounds cliché, but they really are a team that plays better when the forwards are playing well and getting stuck in. When they are doing that, they can match most packs and provide the backs with more room to work with.

The use of forward runners is keeping the ball closer to the ruck, meaning support is closer at hand and they are playing a far less risky game. From that they can either open up gaps, or force the opposition to infringe through building pressure, which was where the majority of Otago's points came from in this game. It also takes the pressure off the backs to create something from nothing, which too has helped lower the error-rate.

The importance of making your kicks at goal cannot be overstated. Basically you can play a great game and lose if you miss those kicks, as along with scoring tries, that is how you make your good play count. Peter Breen was exceptional in this regard, making some tough kicks and missing just one from halfway, which was an ambitious shot to start with. Every one of those kicks ended up being crucial. That is really where you need the standard to be.

It was a windy night in Wellington and both teams struggled under the high ball. From the kickoff and under bombs, the recipients struggled to judge where the ball was going to land and often let it bounce, or spilt it forward, creating dangerous situations when the chase was good. While it had been evident all game, the most significant of these times came late, when Breen misjudged a kick shortly after moving to fullback. Ardie Savea reclaimed it off the bounce, made a strong run up-field and crashed over for the try a few phases later. That should have sewn the game up for Wellington, but somehow they let it slip.

Breakdown inaccuracies in second half

Otago's support play in the first half was, for the most part, very good. They got players over the ball quickly and ensured the Wellington loosies could not get a hand in. That became less prevalent in the second half, as Ardie Savea began to show his class. A series of missed cleanouts and support players being a second too slow saw Otago begin to turn ball over, which made it hard for them to put anything together.

There has been a marked improvement from not only the team, but several individuals over the past few weeks. Matt Faddes is looking dangerous in the midfield, while also looking assured on defence and must continue to wear the No 13 jersey from now on. Blair Tweed in his debut season is impressing with his high work rate in the tight.

In the front row Hisa Sasagi has had his two best games in an Otago jersey over the past two weeks, working hard on defence and making a few good runs. Naulia Dawai has added energy and explosiveness that was missing, while Mika Mafi brought similar strength in contact this week. Playing in an unfamiliar position, Adam Knight is getting better and better too.

Not a bad record

While it would be good to see Otago competing on the same level as those teams, the reality is that they are not there and haven't been there for a while. So to claim two scalps, along with a close run against Auckland, is not a bad effort.

With four winnable games against championship teams to come, Otago should claim a top four spot. Then who knows? They have already beaten the team currently top of the table, who is to say they cannot do it again?