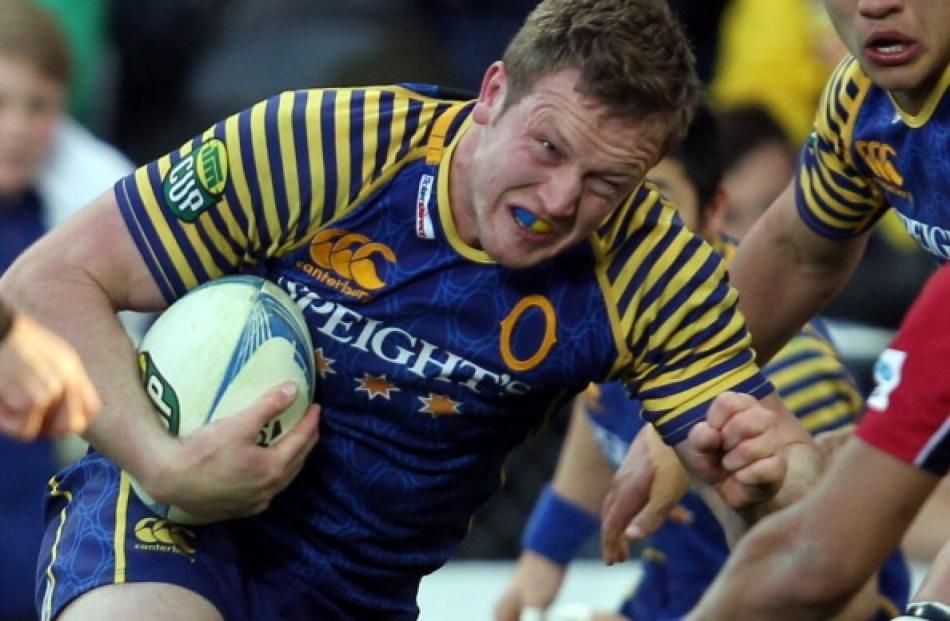 Gareth Evans of Otago on the charge during the ITM Cup Championship Semi Final match between Otago and Tasman at Forsyth Barr Stadium in Dunedin. Photo by Getty.

The dream continues for Otago.

In a pulsating semifinal in the ITM cup championship at Forsyth Barr Stadium tonight, Otago got home seeing off Tasman 41-34 in a match which ebbed and flowed.

Otago was under a cloud earlier in the year if it would even have a team in the competition after it flirted with liquidation.

But it managed to survive and is now 80 minutes away from getting into the top level of provincial rugby.

It was a pulsating contest with Tasman seeming to have the game won with 20m minutes left, 13 points ahead and having the momentum..

But Otago did not give up and climbed its way on the back of a vocal crowd to win the game.

It scored some crunch tries through halfback Fumiaki Tanaka and fullback Tony Ensor to crawl back into the lead. It manged to hang on as Tasman lost composure at the end.

The game had plenty of movement and both teams ran themselves into the ground.

Tasman did not create much in the second half but it did not have to as it got a couple of gifts from Otago.

Twice Otago was pressing on attack but threw poor passes and Tasman outside backs skipped away to run 80 plus metres to score.

It looked game over for the home side after the second of these runaways tries but Otago did not throw in the towel.

Tanaka had his usual good game while Hayden Parker tried hard at first five-eight and captain Glenn Dickson had a great night with his boot.

Up front lock Rob Verbakel worked hard and was strong in the air while replacement hooker Shota Horie looked sharp in his 40 minutes on the field.

Best for Tasman was flanker Shane Christie and hooker Quentin MacDonald was all over the park.

Stand-in fullback Albert Nikoro had a fine match at the back for Tasman and centre Kieron Fonotia ran hard and straight.

He barged over the line after Otago had camped on the Tasman line virtually from the kick-off.

But Tasman came straight back into the game with two long range penalties from Andrew Goodman.

Goodman then helped himself to a try after 20 minutes.

Tasman broke through the line and when the ball landed in first five-eighth Hayden Cripps' hands he cleverly chipped wide when Goodman caught the ball and went over.

Tasman had the roll-on and the home side was struggling to keep up.

But Adam Thomson, making his return to the blue jersey from All Black duty, crossed out wide after some good work inside him to leave the home side still handy at the break.