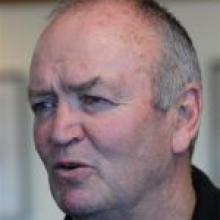 Graham Henry
All Black coach Graham Henry says Highlanders first five-eighth Colin Slade is not out of the picture for the World Cup.

Henry was in Dunedin yesterday and told the Otago Daily Times though he was concerned about the injury toll of All Blacks, no injury at this stage ruled any player out of selection.

"So that is one positive. There are a large number of guys with niggles who are out for certain periods of time," Henry said.

"The worst one is Colin Slade and he is out for another six weeks. We had a chat with him today and saying it is a possibility. We'll just have to see how he comes through this and how he plays when he gets back on the field."

Henry said probably the next biggest injury concern was prop Tony Woodcock, with his foot injury likely to take him out of the game for three to four weeks.

Henry said he had been pleased with what he had seen from the Highlanders, and he was not alone in that.

"I've been very impressed with them, and I think everyone has been impressed. They have played a real style of footy. They are obviously very close as a group of people and enjoying what they are doing. They're playing some highly competitive football."

He said the obvious players were standing out: Adam Thomson, Jimmy Cowan, Ben Smith - "You could go on and on."

Jarrad Hoeata was a contender but he had to continue his form right through the season.

A test squad of 30 was likely to be named for the Fiji test at Carisbrook on July 22 which would carry on into the Tri-Nations, the side being in Dunedin for nearly a full week before the test on Friday night.

"That week in preparation is very important to get us back into rhythm again as the following week we have to play the Springboks in Wellington.

"It is also very important for the players to acknowledge the people of Christchurch."