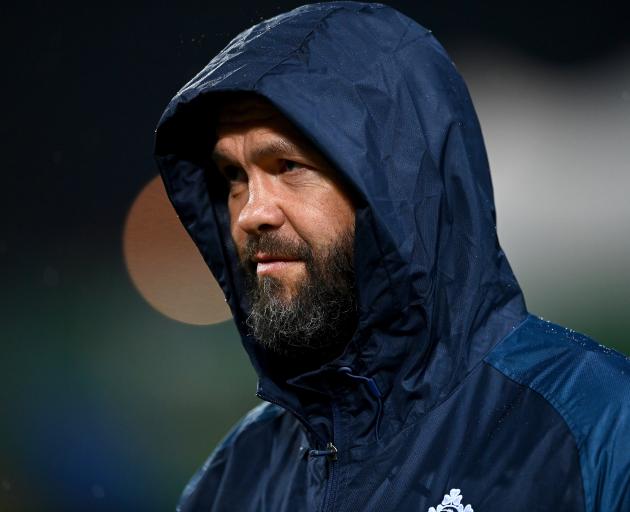 Ireland coach Andy Farrell . . . "This has been more of a straightforward week." PHOTO: GETTY IMAGES
Andy Farrell has given his players the opportunity to avenge their performance.

Ireland has made just one change to the starting line-up for tomorrow’s test against the All Blacks at Forsyth Barr Stadium.

That comes despite a 42-19 loss in last Saturday’s opening test at Eden Park.

Mack Hansen comes in for Keith Earls on the right wing.

been cleared to play, following a concussion scare which forced him from the field last week.

"There’s all sorts of different ramifications that go into selection," Farrell said.

"Sometimes players probably have not performed to the standards they judge themselves on and to not give people the opportunity to correct that is missing. There’s a little bit of that.

"Some people are unlucky not to start, because they had good impact of the bench. They understand that as well.

"To go along with all of that, the guys that get to play on Tuesday night [against the Maori All Blacks] have got the opportunity to put their hand up for selection for the third test.

"Our first hit-out we had a troubled week, as everyone knows. This has been more of a straightforward week. So a lot of the lads have the opportunity to go again."

Farrell admitted the conditions under the roof would suit the All Blacks, although his players knew what to expect.

He was expecting a fast-paced game and an electric atmosphere, similar to what Forsyth Barr Stadium typically produces.

Despite that, he said Ireland was feeling good and was focused on cutting down its error rate.

"The lads are in a good place. Obviously now, the Thursday before the test match, you’d expect them to be ...

"They know the stuff they need to get right. They know the access they give the All Blacks and they understand they can’t do that.

"They know first-hand now you’ll be behind your own posts. There’s been a few things to fix like there is every week."