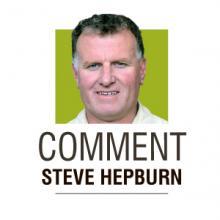 One has to wonder —— just where is the game going?

Ben Smith’s red card is the new high-water mark in this ludicrous path World Rugby seems to be on to clean up the game.

Smith received what is thought to be the first red card of his career in his French Top 14 debut for Pau yesterday in its close loss to Stade Francais.

Smith received the ball, made a break and then attempted to fend off an opponent 50 minutes into the game.

He was ruled to have used an elbow to the head of the tackler, hooker Lucas Da Silva, and was shown a red card.

Now putting away the blinkers because it is Smith — one of Otago’s favourite sons — this was still a harsh call. Unfortunately because of the ridiculous laws played under these days, it was the correct decision.

Smith led with his arm, more of a wrist really, into the neck and head area of Da Silva so Smith deserved a red card.

But a point of order here. Da Silva went high with his tackle.

If he had gone low there would have been no connection with the head. De Silva’s actions led to the red card. It was not a dirty play by Smith.

Using a blanket call to penalise all players who come in contact with a head is just wrong.

It is fast-moving changing game in which accidents will occur.

Many accidents occur every day and it is no-one’s fault. World Rugby is looking for a culprit every single time.

Getting a red card used to be for dirty play. A flying boot to the head. A dangerous head-high tackle. That was fair enough.

Now it is for a attempted fend, which did little damage to the victim.

World Rugby need to watch out.

Apparently it is trying to clean up the game to attract more punters.

Well, at the moment all it is doing is turning the real fans off the game.

Rugby is an aggressive and passionate game in which collisions, some of them ugly, will occur.

True totally Banana's. At times like this I wonder if I ll still be watching the sport in 10 years time. Unfortunately it does seem to be the way NH ref's are interpreting World rugby's rules on head contact. Hopefully there is some sanity
in Super rugby.