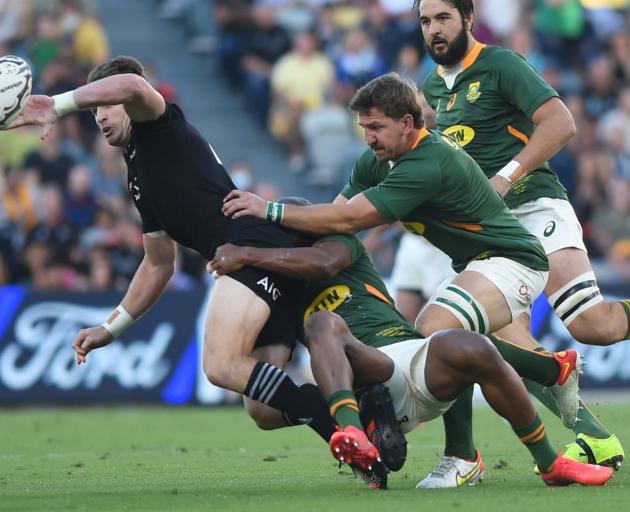 Beauden Barrett delivers an offload during the All Blacks win over South Africa on Saturday. Photo: Reuters
Time to assemble the bomb squad — the next generation.

For the sake of the game, the tactics this Springbok team is employing cannot be successful.

During Saturday’s 19-17 loss to the All Blacks, they passed the ball just 66 times in the entire game, and put up 38 kicks.

That is not even two passes for every kick.

Midfielders Damian de Allende and Lukhanyo Am passed the ball once each — that is not a typo.

In contrast, the All Blacks had 142 passes to their 18 kicks.

It is a tactic typical of the Springboks and British teams, but it has never been this bad.

A rugby purist will call it tough, attritional and ugly.

The masses — and there must be a growing number of purists joining this group — will call it negative, incompetent and boring.

A young New Zealander is not going to watch that game and be inspired to watch again or put on their boots and play.

A potential fan from one of the new markets World Rugby is seeking to break into, such as the United States, is not going to watch that game and want to see more.

But as long as it works, the Springboks will keep doing it.

When teams cannot handle the high ball, it is a legitimate attacking weapon. When they can, it becomes a counterattacking platform and the bombs essentially amount to kicking the ball away.

On Saturday, the tactic was the former.

If the All Blacks can handle those bombs better, it will become the latter — and it will force the Springboks to develop a more well-rounded game.

It is a return to the beginning of a cycle that began a generation ago.

In 2009, the Springboks beat the All Blacks three times.

Just as they do now, there were plenty of attacking threats in that team. They just did not want to use them.

Morne Steyn launched a plethora of bombs for the likes of Bryan Habana and JP Pietersen to chase.

It was a tactic All Black wingers Joe Rokocoko and Sitiveni Sivivatu did not handle.

The South Africans would rely on scraps to score, while looking to Morne and Francois Steyn to knock over kicks — even in their own half, in the case of Steyn.

That caused a rethink.

Cory Jane and Israel Dagg were brought in and barely dropped a high ball. Rokocoko improved and Mils Muliaina was his typical solid self.

They formed a back three that proved lethal on the counterattack a year later, as the All Blacks swept aside the Springboks.

Crucially, it forced the Springboks to adapt. The high ball was no longer an attacking threat, so they had to develop a more well-rounded game.

By 2013, they had done that. South Africa became a team that played genuinely impressive all-round rugby and its backline became dangerous.

Would the Springboks have changed had the All Blacks not forced their hand?

Maybe. But it is hard to see it.

As long as a tactic works, a team will keep using it.

For the sake of rugby, New Zealand and Australia need to ensure it does not work.