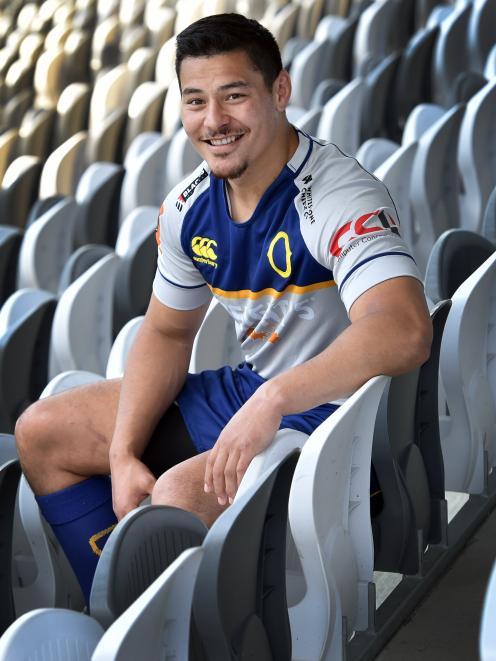 Sio Tomkinson. PHOTO: ODT FILES
In an already shortened season, midfield back Sio Tomkinson will have spent more time on the side than most by the time the year ends.

Tomkinson was given a six-week suspension yesterday after he was red-carded in Otago’s game against Auckland at Forsyth Barr Stadium on Saturday night.

Tomkinson was sent from the field by referee James Munro in the 81st-minute of the match after he came on to the field as a second-half replacement.

The midfielder hit Auckland replacement first five-eighth Simon Hickey with a high tackle, using his shoulder. Hickey collapsed to the ground and was assisted off the field. After viewing the tackle on the television screen, Munro sent Tomkinson off.

Reviewing the evidence after the game, duty judicial officer Nigel Hampton QC found Tomkinson’s action was reckless and resulted in the opposition player being injured and removed from the match.

The entry point for the sanction was ruled to be at the top end of 10 weeks.

Hampton took into account Tomkinson’s immediate admission of wrongdoing and expression of regret which resulted in the final suspension of six weeks.

With the Mitre 10 Cup comprising 10 regular-season games, he will have only three matches left to play in the regular season when he comes back.

He will be able to play Canterbury, Southland and Tasman.

Tomkinson has always been a strong and rugged defender but he is starting to get a reputation for dangerous and late hits which will be a blight on his game.

He missed three weeks earlier this year after a tackle on Brumbies outside back Tom Banks in a Super Rugby game and was again yellow-carded in a game against the Crusaders early last month after he collided with Crusaders prop Oliver Jager.

He did not get a suspension as a result of the incident but was not so lucky this week.

With the Mitre 10 Cup lasting only 10 weeks, getting six weeks off is a big spell on the sidelines.

Otago does have plenty of cover in the midfield.

He needed to work on his technique but did not want to take away his aggressive nature which was a part of his game.

Tomkinson had something of a breakthrough year for the Highlanders in the Super Rugby Aotearoa competition, playing at his preferred second five-eighth position and showing good skills on attack after being pigeon-holed as more of a defensive player.