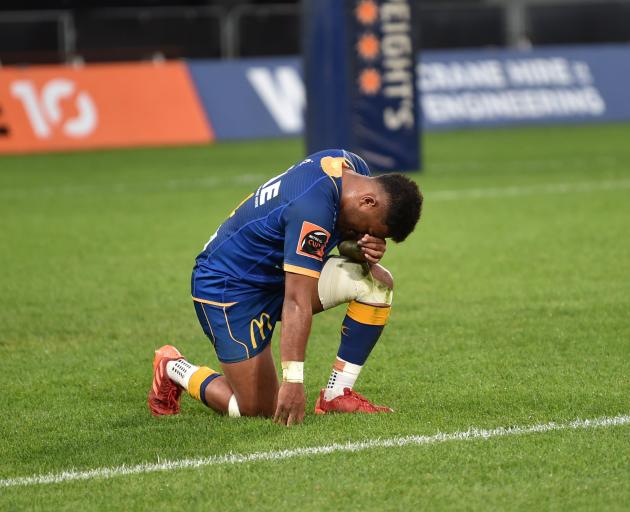 Otago wing Vilimoni Koroi is down on one knee devastated after Otago’s loss to Northland in the Mitre 10 Cup Championship semifinal at Forsyth Barr Stadium in Dunedin on Friday night. PHOTOS: GREGOR RICHARDSON
Otago once again fell at the semifinal stage. The season had looked so promising a month before. Rugby writer Steve Hepburn looks back at what happened and why.

It was not quite a choke on the scale of Dean Barker in San Francisco or Greg Norman at the Masters but it was a collapse no-one saw coming.

With two games left in the regular season, Otago was looking good and in pole position in the Championship section of the Mitre 10 Cup.

It had just beaten Canterbury for the first time in 15 years and the players were in form.

But the team went to Invercargill and played poorly to lose to Southland 32-15, not scoring a point in the second half.

It then lost 26-20 to Tasman and went down 32-19 in a below-par performance against Northland in the semifinal.

It was a bitter pill to swallow for the coaching staff and supporters. 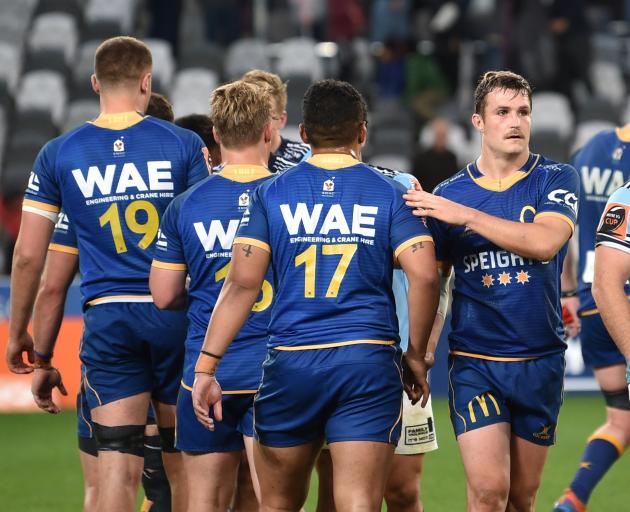 Replacement Otago forwards (from left) Will Tucker, Henry Bell and Sef Fa’agase and captain Michael Collins after the game.

The side had started with a loss to Auckland which was expected as Auckland was stacked with All Blacks and was simply too good.

But Otago went on a good run in the middle of the competition and won four in a row, including an exciting victory over Wellington in the capital.

The loss to Southland was poor and first five-eighth Josh Ioane had a match to forget.

When a first five-eighth plays as poorly as Ioane did that night then the team has little chance of winning.

Ioane looked dynamic at times in the first half of the season but fell away near the end.

Tasman was a struggle — and was always going to be — and then few fronted against Northland as the forwards were outgunned and the backs made some poor decisions.

It was like Otago had run its race and upped sticks with three weeks left in the season. The commitment and aggression at the breakdown disappeared and the gaps just failed to appear for the backs.

The coaching staff was at a loss as to why it happened and so was everyone else.

Ioane and Vilimoni Koroi were disciplined by being forced to miss the first Northland game as a result of failing to turn up for training in good condition after a game the night before.

But that hardly wrecked the season as when the duo returned in the following match, Otago beat Canterbury.

Maybe the players were simply just only good enough to play well for three-quarters of the season. Their ability and skills were exposed as they were not consistent enough for the whole season.

Players have bad games in them. The problem for Otago was they all came together at once.

Losing hooker Liam Coltman after the Canterbury game was also a big blow. His ability at the breakdown is sometimes overlooked.

The injury to lock Josh Dickson before the Southland game did not help as he was a key man. He was also injured in the first minute against Northland and was well below his best for the rest of the time on the park.

George Bower disappearing to Australia to hold tackle bags was also a blow.

Winger Jona Nareki was consistently good and flanker Slade McDowall got plenty of turnovers although he was not quite as good as last year. Prop Josh Hohneck was solid and would be a useful pick for any Super Rugby franchise.

Best game: v Taranaki, won 30-19. A
polished professional performance in
which everyone did the job and Taranaki
was well beaten.
Worst game: v Northland, lost 32-19.
Take your pick from the last three games
but the Otago forward pack was poor
and a couple of key backs were below
average.
Three questions from the season
Comment now