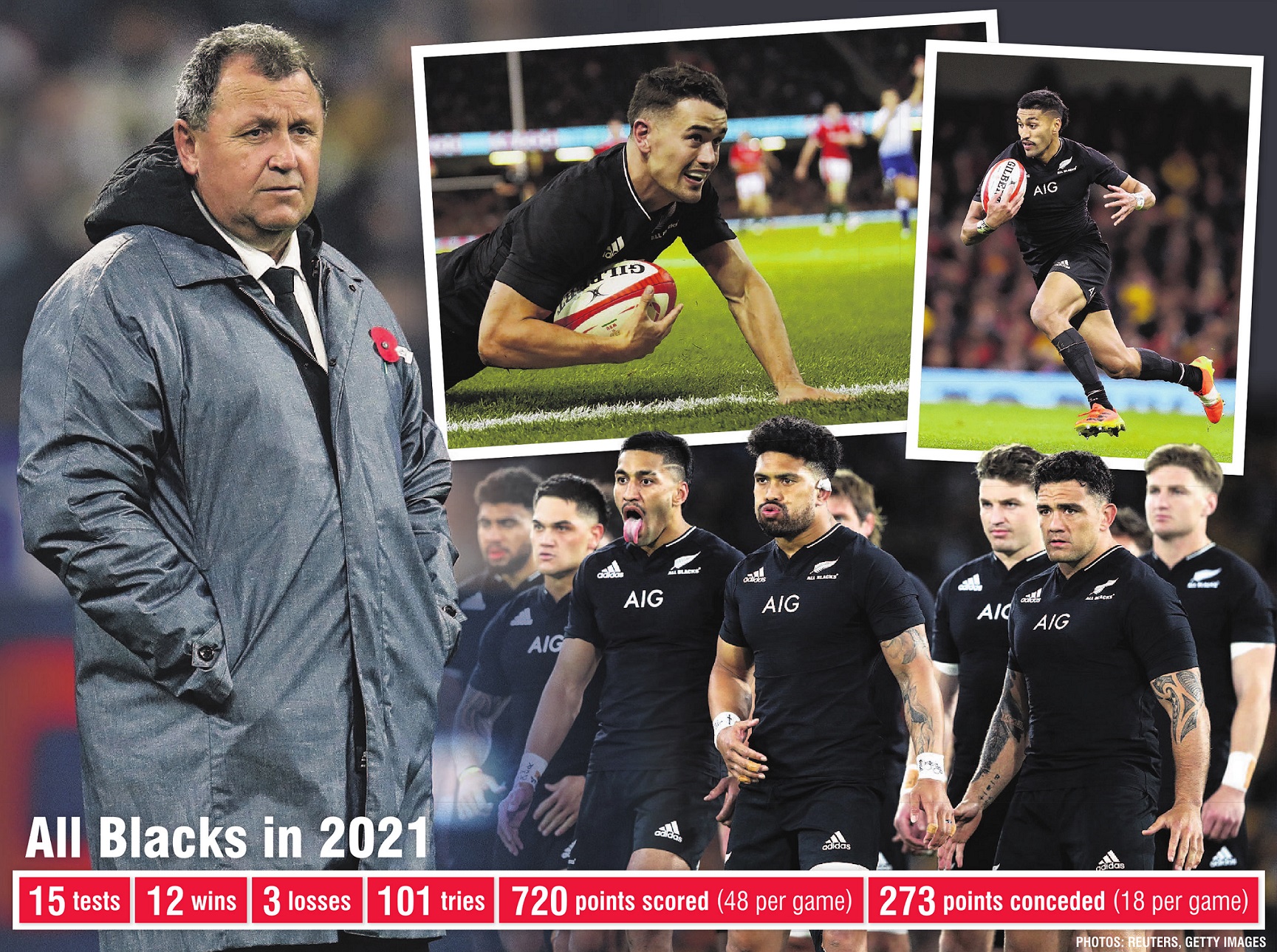 As the All Blacks return home after 13 weeks on the road, Jeff Cheshire looks back at their 2021 campaign.

This showed the All Blacks at their best, particularly in the last half hour. When the game opens up and they can run and pass freely, this team is still very much the best in the world. They put on a clinic against Wales in that regard.

Not just because it is so fresh in the mind, either. France completely outplayed the All Blacks, physically dominating them up front and cutting them to pieces out wide. It is not often an All Black team goes to halftime down 24-6.

Scoring tries is not necessarily a telltale sign of a good player, but the outside back was good for the 15 he scored in black this year. Only Joe Rokocoko’s 17 in 2003 has surpassed that tally in a calendar year. Things happen when the ball goes his way and he does not make many mistakes.

Exceptional under the high ball and the best boot in the team. Had plenty of detractors a few years ago, but at this point looks to have the No15 jersey locked up.

Aggressive, explosive and an absolute handful going into contact, as always. A bit quiet at points earlier in the year, but certainly finished the season well and was immense in the early part of European tour.

Who are the big-game players going to be?

In the tough games, in front of big crowds and against top opposition, who is going to step up and embrace the occasion? In years gone by, the likes of McCaw, Carter and Read would find another level in those situations. There are few of those left — an old Sam Whitelock, an underdone Brodie Retallick, a recently returned Aaron Smith and a former maestro in Beauden Barrett. Developing a few players to take control in those big moments is crucial for this team.

How much impact did the travel have?

This team was on tour for three months. Yes, the teams of the amateur era would go on tours this length. But this is a group of players who have never endured a trip of this length before — and probably never thought they would have to. Certainly it is likely it had an impact on their performance. That does not change the results. It is also not a great indicator of how this team might perform in different circumstances when, provided MIQ is no longer a factor, it will not have to conduct a tour this long.

Two weeks ago, you had to give it to Foster — he had guided the All Blacks through 12 tests with just one loss, after a tumultuous 2020. Then the team faltered. It seemed to run out of ideas against rampant Irish and French teams. Foster does not have the team of greats his predecessors had to work with, although there are still questions over whether he is the man for the job.

Where are the reinforcements coming from?

There are some obvious holes in this All Black team. In the past, it has often been a case of the wrong players being picked. This time, it seems more a case of the players not being there to pick. The midfield is a major concern. Outside Anton Lienert-Brown, there is very little there — and little that has not already been tried. Jack Goodhue is to come back, although he is more steady than brilliant. Similar things could be said about a tight five that has been outplayed in recent weeks.

How are they tracking?

Ultimately, everything is geared around the World Cup — rightly or wrongly. Two years out from the next one, these All Blacks are hardly looking like world beaters. The same could be said in 2009, but there were signs of improvement by the end of that season and some very good players coming off injury. This time, there is a good chance the All Blacks, for the first time since 2003, will not enter the World Cup as favourites.