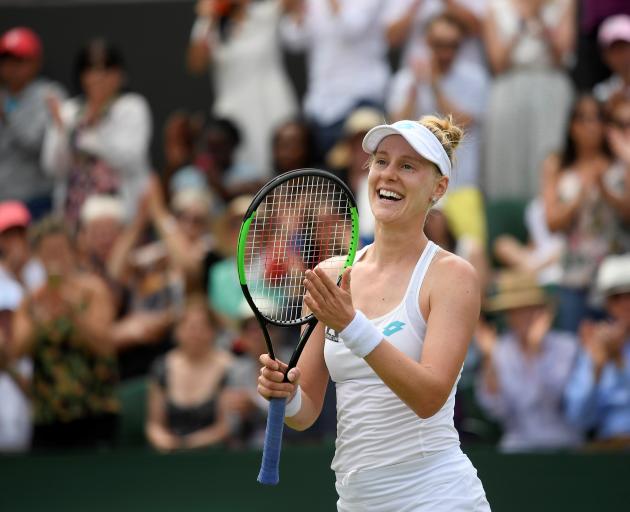 Alison Riske celebrates winning her fourth round match against Ashleigh Barty. Photo: Reuters
In knocking Australia's world No 1 Ash Barty out of Wimbledon, Alison Riske created one of the biggest shocks of the tournament on 'manic Monday'.

The American set about ending Barty's 15-match winning streak without a hint of intimidation with a 3-6 6-2 6-3 victory over the French Open champion,

She lost the first set but dug in for a trench battle, out-slugging Barty to take the next two and set up a last-eight clash with seven-times champion Serena Williams.

"I'm so incredibly excited. The fact that it's at Wimbledon, my favourite Grand Slam, the place that I had always dreamed to be in the last eight club, they can't kick me out now, I'm here to stay," she said. "I am just over the moon."

On paper, Riske seemed to have little chance of causing an upset. At 29, she had never reached a Grand Slam quarter-final and had spent over four hours more on court than Barty in the first week.

Yet her three previous matches, which all went the distance, told of a fighting spirit and battle-hardened endurance that would not give an inch if she could drag Barty into a dogfight.

"Tough one to swallow but I lost to a better player," said Barty. "She deserves to be in the quarter-finals. She played a great match today."

After Barty won the first set, the 21st in a row she had taken since her French Open semi-final, it seemed she might continue a run at Wimbledon that had seen her glide through her opening three matches in three hours, losing only 12 games.

Yet Riske broke in the fourth game of the second set and then again in the eighth as Barty struggled to execute in the face of relentless pressure from the American.

There was little to separate the players in the third set until the eighth game when Riske hit a ferocious backhand winner to set up a break point and followed that with another off the other flank to bring the finish line in sight.

She brought up match-point on her serve and a fierce contest was brought to a halt when Barty sent a backhand wide, leaving Riske to relax and enjoy the moment.

She seems in no hurry to leave Wimbledon and will face the 23-times Grand Slam singles champion Williams in the next round.

"I'm ready for a war. She's the greatest athlete I think that's ever been on the women's side," said Riske. "It's going to be a huge challenge, but I'm really looking forward to it." 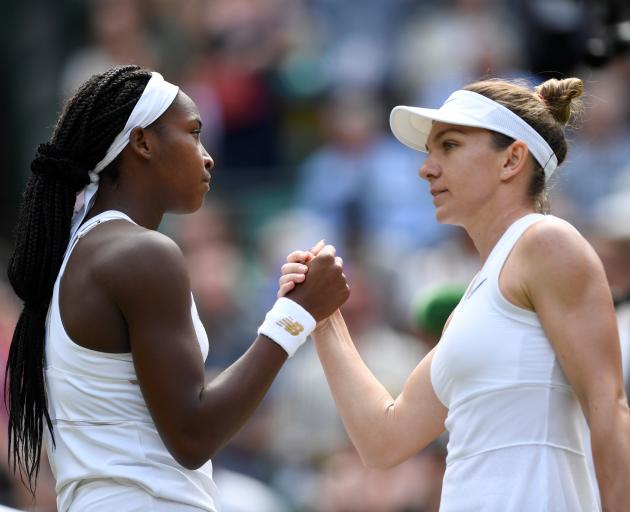 Coco Gauff's dream Wimbledon run came to an abrupt end when the consistency of seventh seed Simona Halep proved a step too far for the 15-year-old American, who went down 6-3 6-3 in only 75 minutes.

After stunning Venus Williams then saving two match points en route to beating Polona Hercog last week, Gauff was suddenly the hottest ticket in town but was always going to find it tough against Halep, last year's French Open champion and the first top-10 opponent she had ever faced.

Bidding to become the youngest Wimbledon quarter-finalist since fellow-15-year-old Jennifer Capriati in 1991, Gauff was by no means overawed, keeping the crowd entertained with some crashing backhands and athletic recoveries, but there were also far too many simple errors that the American was never going to get away with at this stage of the tournament.

Halep, who had given an indication of her form when dismissing the dangerous Victoria Azarenka in the last round, initially struggled, including in the third game where she sent down three successive double faults.

But Gauff was even more inconsistent, mixing up some superb shots with some pretty awful ones.

She did save two match points when serving at 5-2 down but this time it was only a temporary reprieve as Halep finished her off in the next game.

The Romanian will now face China's Shuai Zhang in the quarter-finals and, with the bottom half of the draw looking wide open, Halep has a great chance of going on to make the final for the first time.

KVITOVA AND PLISKOVA OUT

Britain's Jo Konta staggered away from a head-on collision with twice champion Petra Kvitova at Wimbledon for a three-set victory which put her in the quarter-finals, and instantly installed her among the favourites for the title.

The 4-6 6-2 6-4 win over the Czech had been a brutal affair, and in the end only Konta had been able to produce sufficient subtlety with which to temper the low-trajectory rockets which had been a feature for both players throughout the match.

Muchova won 4-6 7-5 13-11 in three hours and 17 minutes, claiming victory with a netcord as Pliskova's wait for a first Grand Slam title continued.

In her first Grand Slam quarter-final world No 68 Muchova will face eighth-seeded Ukrainian Elina Svitolina after she eased past Croatia's Petra Martic  6-4 6-2.

Serena Williams reached her 14th Wimbledon quarter-final by overwhelming Spain's Carla Suarez Navarro 6-2 6-2 even though she was not at her magnificent best on Court One.

The 37-year-old American, aiming for a record-equalling 24th Grand Slam title, produced 19 unforced errors, including a bizarre mistake when she leaned over the net to hit a volley and had the point docked.

But she also conjured 21 winners, some of which left the crowd gasping in admiration and her 30-year-old opponent helpless on the other side of the net.

Williams, seeded 11th, had little match practice coming into Wimbledon because of injury and teamed up with Andy Murray in the mixed doubles to get some more playing time.

Meanwhile, Williams has been fined $US10,000 ($NZ15,000) by the All England Club for damaging one of Wimbledon's courts with her racket prior to the start of the tournament, media reported.

Fabio Fognini was also fined $US3000 for unsportsmanlike conduct after a rant during his third round defeat to Tennys Sandgren. The Italian had said he hoped a "bomb" would explode at the All England Club.

Ruthless Roger Federer raced into his 17th Wimbledon quarter-final with a 6-1 6-2 6-2 demolition of Matteo Berrettini.

A match that on paper looked as if it might provide the Swiss' first big test of the tournament as he chases a ninth title was a no-contest as his 23-year-old Italian opponent self-destructed on Centre Court.

Novak Djokovic, of Serbia, remained firmly in cruise control as he swatted aside France's Ugo Humbert.

Djokovic, capable of jaw-dropping feats of agility when pushed to the brink, has barely stretched a sinew in reaching the last eight and the 21-year-old Humbert proved incapable of applying any real pressure in a 6-3 6-2 6-3 defeat.