Swimmer inspired to give it one more shot 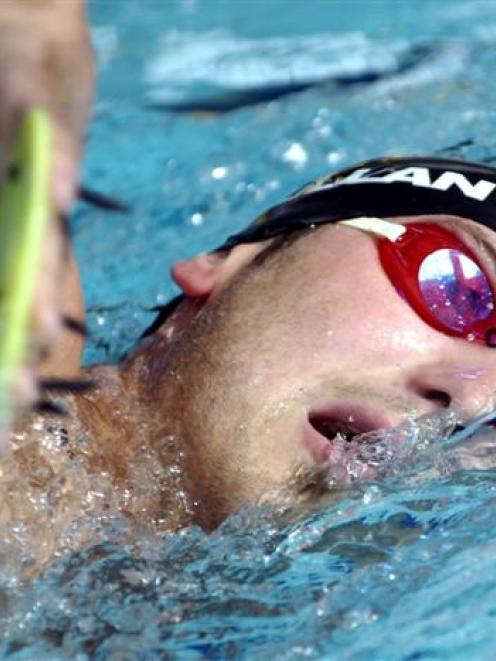 Andy McMillan: "I've dreamed my whole life of going to the Olympics".
Andy Mcmillan was gutted not to qualify for last year's Olympic Games.

But as he watched the swimming on television, he realised he loved the sport too much to give it up and would have to stick at it for another four years.

"The 2012 Olympics are pretty much my main objective now, to make a final there or have a go at a medal," he says.

"There's no point in just participating."

To get an idea of what "sticking at it" involves, one only needs to look at McMillan's weekly training schedule - 10 two-hour sessions (or up to 80km) in the water, with two or three gym sessions added in.

And the commitment seems to be paying off, with him breaking Danyon Loader's 200m freestyle short-course New Zealand record just last month.

McMillan was always a talented swimmer, but the pool in his home town of Cromwell shut in winter, so at the age of 14 he moved to Dunedin to train with Duncan Laing.

After initially boarding at the Otago Boys High School hostel, he moved into a flat opposite Moana Pool and trained twice a day, later fitting the sessions around his physical education studies at university.

About two years ago, he moved to Auckland, where he trains at the Millennium Institute of Sport and Health under Scott Talbot, son of New Zealand's head swim coach, Jan Cameron.

Last year, his times for the 200m freestyle and 200m butterfly at the national championships were just short of the qualifying standard for the Olympics.

This year, he swam 0.6sec under the required time in the freestyle.

"It's frustrating," he says.

"But it's made me a better, more hungry swimmer."

The former Class Act recipient had been training with Cameron's high-performance squad and hitting all his target times, but thinks he probably moved to Auckland six months too late and was playing catch-up.

And since April, he has spent nearly four months swimming in Australia, the United States and Rome.

McMillan hopes his New Zealand record will help him attract sponsors, but says the economic recession may affect his ability to concentrate purely on training.

Since missing the Olympics, he has not qualified for a living allowance from Swim New Zealand and before his last trip overseas he moved out of his flat so he did not have to pay rent.

Holding down a full-time job is impossible and studies have also taken a back seat to sport.

He's been one paper short of his physical education degree for about two and a-half years but plans to finish it soon and attend teacher's training college in Auckland next year.

"Along the way there's the Commonwealth Games next year in Delhi, the Pan Pacific champs in California and the world short-course champs in Dubai.

"The year after that, there's the world champs somewhere. But I can't remember where. It's just ongoing."

Catching up recently with an old school friend who has a rewarding, well-paid job made him think he had put his life on hold for swimming, he says.

But his friend reminded him that he not only got satisfaction from the sport but had been around the world several times.

"I kinda forget about the rewards I'm in this for. And I don't want to live life with any regrets and be thinking `what if?' when I'm older."