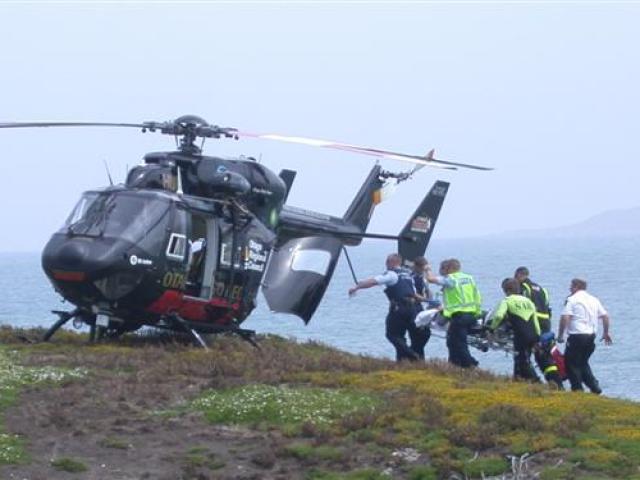 Search and rescue help was quickly on hand for a Kakanui man when he fell ill and collapsed during a fishing trip to the island at the end of Katiki Peninsula south of Moeraki yesterday afternoon.

A bad bout of food poisoning and an expedition into extremely dangerous terrain gave Estonian tramper Andre Lipand a 26th birthday he will never forget after he became trapped in a deep gorge in Mount Aspiring National Park at the weekend.
Two Saudi Arabian men had to be rescued from Lake Wakatipu off Queenstown yesterday after they fell out of kayaks near Earnslaw Park in rough conditions.

It was second time lucky - or unlucky - for two Dunedin men at the centre of a water rescue off the Otago Peninsula yesterday.
Hope was fading last night for 17 missing fishermen after their South Korean trawler In Sung sank in the Southern Ocean, claiming at least five lives.
The helicopter pilot who led the retrieval of a climber killed on Mt Aspiring on Wednesday was on his first operation for the Wanaka Alpine Cliff Rescue Team.

Jack and David Malcolm dragged in more than they bargained for when they went fishing at the Steamer Basin in Dunedin yesterday morning.

The man who took the mayday cellphone call from two French kayakers found dead on Lake Wakatipu on Monday night says the rescue response was too slow and the deaths should spark debate over bringing the Coastguard to Queenstown Bay.
Adventure Southland has been sent a bill by Kawarau Jet, which answered a mayday call after four Queenstown Resort College students capsized while kayaking on Lake Wakatipu on September 25.
Rescuers should have gone into the Pike River mine more or less straight away, says a miner who survived New Zealand's last coal-mining explosion disaster.
A hunter who went missing in Fiordland National Park on Tuesday night was winched to safety by a search and rescue (SAR) team after he was found with a broken leg yesterday afternoon.

For weeks afterwards, Ernie Tweedie jumped and groaned as he dreamed of the miners he could not save from a cave-in at the Fernhill Coal Company's mine near Brighton.
Family and friends affected by the Pike River mine explosion should try to keep to a normal routine despite riding an "emotional roller coaster", a counsellor involved with the Beaconsfield Mine disaster says.
A 57-year-old Waimate hunter who spent a night in the bush near Queenstown after becoming separated from his 43-year-old companion was found safe and well yesterday.

One of Wanaka's canine superstars, Macca John Robert Gibson (8), sparked a fire service callout yesterday morning after he got stuck in a Lindsay St culvert while chasing a rabbit.
A rise in the number of visitors to the learner-friendly slopes of Cardrona Alpine Resort has been matched by a corresponding surge in the number of skifield accidents on the mountain.

A 25-year-old Dunedin man was airlifted from the sea near Taieri Mouth yesterday afternoon.

Police have named a woman climber killed in a fall on Mitre Peak in Milford Sound, Fiordland, yesterday.

All 120 independent trampers stranded since Monday on the storm-damaged Milford and Routeburn tracks were evacuated by helicopter, bus or boat to Te Anau yesterday afternoon, with no injuries reported.