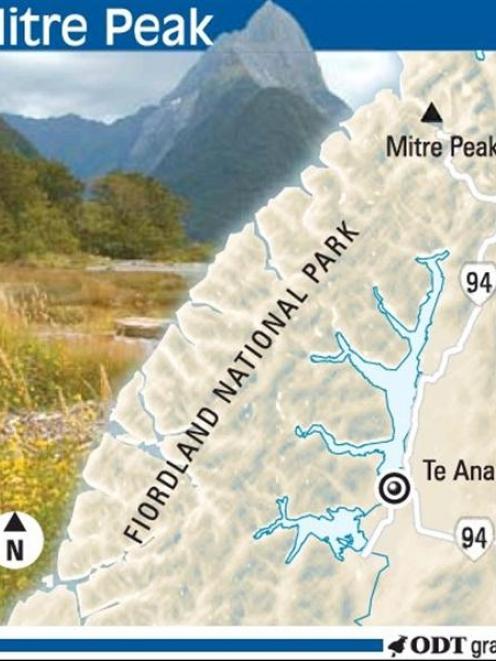 Police have named a woman climber killed in a fall on Mitre Peak in Milford Sound, Fiordland, yesterday.

She was Lynne Marie Osborne, 46, of Dunedin.

Ms Osborne was climbing in the area with a male companion when she fell about 200 metres yesterday morning.

An emergency beacon was set off in the Mitre Peak area shortly before midday yesterday, and a rescue helicopter was sent from Te Anau to Milford Sound by the Rescue Coordination Centre of New Zealand (RCCNZ).

The male climber was found about 5pm, after low cloud hampered the search, the Otago Daily Times reported.

The man was airlifted by a Southern Lakes Helicopters rescue helicopter to Te Anau but the woman's body could not be recovered.

The man was reported to be distressed but physically unhurt.

RCCNZ spokeswoman Sophie Hazelhurst said this morning the operation had been handed over to police, who would attempt a body recovery today.

Te Anau police could not be reached for comment this morning.

Sergeant Todd Hollebon, of Te Anau, declined to provide any information about the incident last night.

An Invercargill colleague said last night police in Te Anau had had "the day from hell".

As well as the Mitre Peak rescue, Te Anau officers attended a drowning at Lake Mavora and a serious road crash at Garston.

Senior Sergeant Richard McPhail, of Winton, would be dispatched this morning to help out in Te Anau.

Mitre Peak (1692m) is known to be a challenging climb with sheer drops into Milford Sound.

Department of Conservation area manager Reg Kemper had few details about the incident last night, but told the the Otago Daily Times Mitre Peak attracted both local and international climbers.

Fiordland had "a lot of incidents", he said, and it was "easy for people to underestimate" the area.

He said it was important for visitors, whether they were hunting fishing, tramping or climbing, to be properly equipped and have regard for the weather.

In 2002, a German visitor, Jonas Theiss (27) died after falling about 200m from a ledge on Mitre Peak. - Additional reporting by NZPA.