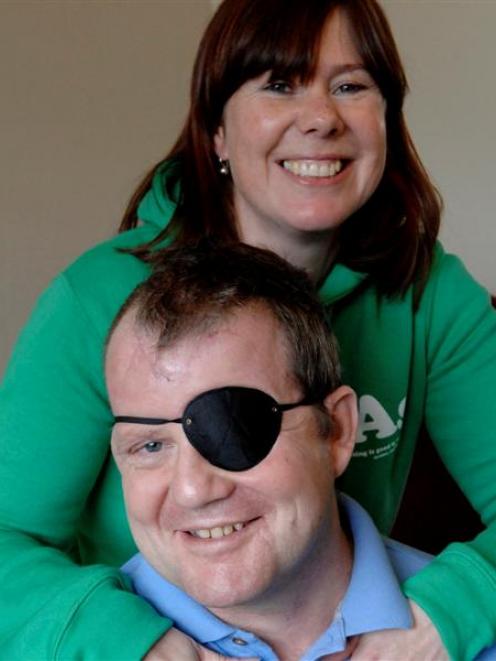 "Oh, like the Spice Girl, Geri Halliwell?" she asks.

Until his partner, Anna Morgan, can't stand it any longer.

"She is not, Mark!" And the couple dissolve into laughter.

It is pretty obvious Mr Halliwell (40) is well on the way to recovery after the hang-gliding accident which nearly killed him, when he crashed into a hill in Omarama on January 23.

"I can only remember back four or five weeks. It was a very severe traumatic brain injury and I had post-traumatic amnesia for four weeks," he said yesterday.

"It's still unknown what caused the accident. They say there were gusts of wind around Omarama at the time."

He is in no doubt, however, what would have happened without the quick response of the Otago Regional Rescue Helicopter and neurosurgery unit at Dunedin Hospital.

"I think I'd be dead. I nearly died anyway, according to the nurses. I was very, very lucky.

From what everyone tells me, it wasn't looking good. But my chances of survival were significantly increased because they got me to Dunedin in good time and because there is a neurosurgery here."

Mr Halliwell was discharged from hospital on Thursday and left Dunedin to return to England yesterday.

"When the doctors were talking about my recovery, they were using words like 'miraculous' and 'stupendous'. I'm expected to make a full recovery in nine months to two years," he said.

"I'm fine with my memory now, but physically it's harder to do things, so I get tired. My left eye doesn't work like it should. I got a blow-out fracture and nerve damage in my eye. They hope it might improve in about six months, but it's really a minor issue. I'm alive. I've traded one of my eyes for my life."

Mr Halliwell had been working as a farm manager in western Ukraine, when he travelled to New Zealand on holiday.

While he was unsure about returning to hang-gliding, Ms Morgan, a nurse, was definite.

"No, he's not. It's bowls and dog walking from now on.

"It's amazing that two weeks before the accident they were thinking of closing the neurosurgery department at Dunedin Hospital.

"We had a similar thing happen to the neurosurgery department back in our home town in Somerset. It was closed and turned into a car park. I'd hate to think what would have happened to Mark if you'd done that here."