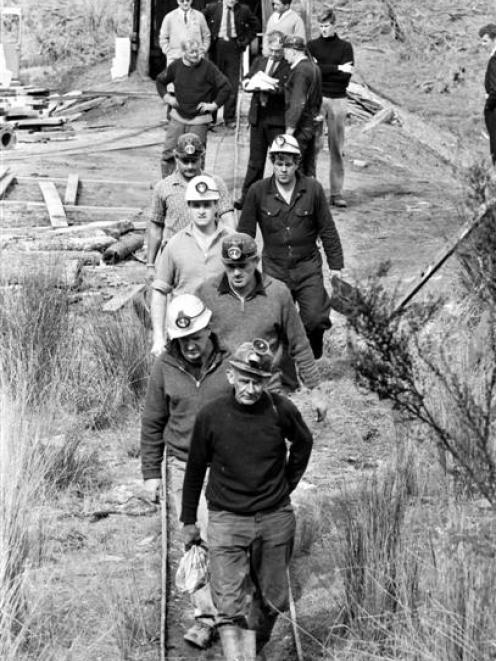 September 20, 1969: A team of miners and police head into the Fernhill mine near Brighton to relieve rescuers after a mine cave-in that killed two men. Ernie Tweedie was first on the scene, as reported on the front page of the Otago Daily Times.
For weeks afterwards, Ernie Tweedie jumped and groaned as he dreamed of the miners he could not save from a cave-in at the Fernhill Coal Company's mine near Brighton.

The miner was the first on the scene, the first to start digging, and the first to find one of the two men killed in the rockfall 800m from the mine entrance, and more than 60m underground.

It was a long time ago - September 20, 1969 - but the memory was revived for his wife, Shirley, by the developing "and very, very awful" tragedy at the Pike River coal mine.

"He had such terrible sleeps after what happened; he kept having the flashbacks of his mates," Mrs Tweedie (78) said as the television news detailed the names of the 29 missing miners.

"It was such a dreadful time, and seeing what has happened on the West Coast just brings the memories back.

Mrs Tweedie said her husband was working in the mine when he received a telephone call from the surface, asking him to check why no coal had been received from another part of the mine.

The former jockey hurried, stooped, through the 1.2m-high tunnel to where Mervyn Thomas and Bill McTaggart were supposed to be working.

In their place was coal and rubble.

He dug, frantically, to find the body of Mr Thomas.

It took more than seven hours for miners and police to find the body of Mr McTaggart, buried under tonnes of rock, coal, and sand.

The Otago Daily Times story clipped and saved by Mrs Tweedie said falling rock and coal made "every inch of the searchers' digging treacherous".

Mr Tweedie came home after 10pm, after visiting the families of the men the rescue party had no hope of saving.

He was deeply affected by what happened.

"Oh, he jumped and groaned in his sleep for a long time afterwards.

"It was something he did not forget," Mrs Tweedie said of her husband, who died two years ago.

"I wanted him out after that."

Mrs Tweedie said the experience of the families and would-be searchers on the West Coast would be much worse.

"I really do feel for them.

"You know every day when someone goes to an underground mine that it is a dangerous job.

"But this tragedy is dreadful... we are all hoping for a miracle."