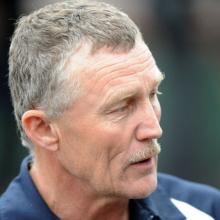 Tony Kokshoorn
Grey District Mayor Tony Kokshoorn has backed the renewed bid to re-enter the tunnel leading into the Pike River Mine, but cautions that the large rockfall between the drift and the mine workings where the men were working at the time of the explosion will limit the chances of recovering bodies.

Andrew Little said this week he wanted to move on the re-entry as quickly as possible.

He also acknowledged he might now become privy to information not in the public domain about why Solid Energy had been so reluctant for a manned re-entry.

"It will be interesting to see what the [previous] government has and hasn't previously disclosed,'' Mr Little said.

The families have always accepted that the rockfall appears to block entry to the mine proper and most of the bodies are probably trapped on the other side of it.

Bernie Monk, whose carpenter son was among the 29 who died in the explosion, said in a statement recently: "We aren't asking to go all the way into the mine - just the entrance tunnel.''

He repeated that this week, stressing they were not looking too far ahead.

However, a mistaken belief has spread on social media and some mainstream media that the re-entry of the drift - the 2km-long tunnel leading to the mine workings - will allow the retrieval of the remains of the 29 men.

Mr Kokshoorn spoke out on Thursday to ensure there was no false hope, as the rockfall would stop progress up the drift.

He could not discount the possibility there were "one or two bodies'' on the drift side of the rockfall, within the 500m of the drift not seen by the electrician who went underground immediately after the disaster, or by cameras lowered into it since.

However, he still firmly backed the re-entry attempt.

Until they get in to the drift no one knows how far they can go....expect anything. This should have been done years ago.....