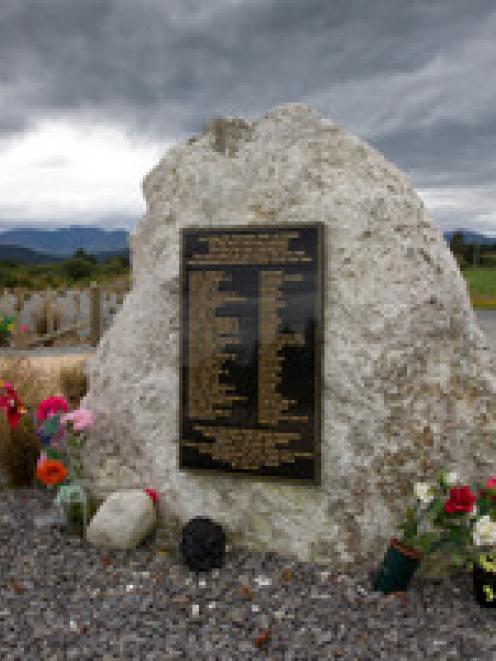 The Pike River memorial at Logburn Rd on the West Coast. Photo: NZ Herald
The disaster-struck Pike River Mine site and surrounding land should become part of a national park, including a 'Great Walk' track and a visitors centre, some of the victims' families say.

The call came today from members of the Pike River Families Group Committee, which represents some of the family members of the 29 men who lost their lives in the 2010 mine explosion, following a consultation with the Government last year.

Environment Minister Dr Nick Smith met the group's representative Bernie Monk, who lost his son Michael in the disaster, in Greymouth today, where they also took a flight over the mine site.

In a statement, the families said they wanted to incorporate the Pike River Mine site and the surrounding area into the Paparoa National Park, to "ensure the future protection of the area and to ensure continued access to the area for families and the New Zealand public".

It would also support using the existing mine building to create an accommodation and visitors centre for the families and public, which would outline the history of the disaster and the nation's response to it.

A function and training facility would also be part of the centre.

"Family members view the latter proposals as a positive way of providing an enduring memorial to their men and an enduring economic benefit to the local West Coast communities, which suffered significantly from the loss of the mine and the economic benefit it provided," the statement said.

The group had come to the decision following a survey of its family members, which showed "a clear majority" in support of the group's work with the Government to implement the proposals, it said.

The proposals also include a continued investigation into ways of bringing those responsible for the disaster to justice, the group said.