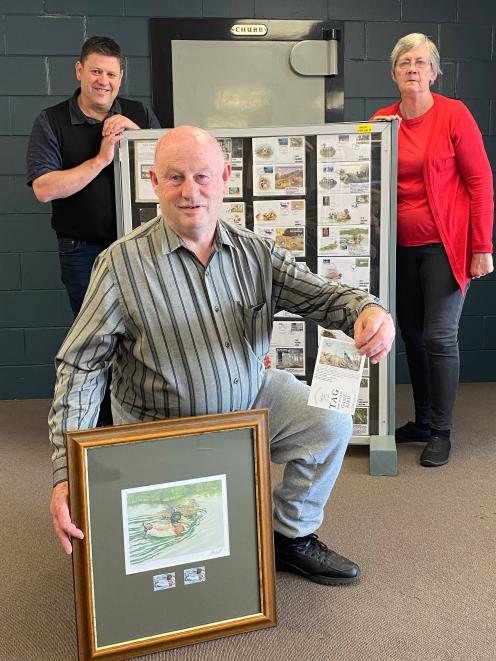 Otago Philatelic and Postcard Society member Graham Pelvin has loaned the display, collected over the past four years, to Otago Fish & Game to use as a promotional tool at events.

A keen stamp collector, Mr Pelvin was intrigued by the beauty of the game bird stamps, which feature images by New Zealand artists, and set about building up a uniquely comprehensive collection.

"They are such attractive images and the funds go to such a good cause that I became fascinated with them," he said.

The display panel stand was built by Mr Pelvin at the South Dunedin Blokes Shed, where he is a member.

The collectable first-day stamp covers have been issued yearly since 1994, as part of the Game Bird Habitat Stamp Programme administered by the New Zealand Fish & Game Council.

Funds raised through the habitat stamps are distributed by the Game Bird Habitat Trust to projects that protect and restore game bird habitats, including the Takitakitoa Wetland project near Henley.

The programme has raised more than $1million for the restoration of habitats since it began.

Otago Fish & Game chief executive Ian Hadland said the funds raised through the stamps had been of major benefit to wetland habitats in the region.

"It is vital that we look after the health of the remaining wetlands in this country — they are the kidneys of the land," he said.

Just 10% of New Zealand’s original wetlands still remain, compared with pre-European times. Many have been drained for development over the years.

The 2022 game bird season will start on the first Saturday in May, and the Game Bird Habitat stamps will be sold from March onwards.

"It’s great to see these wonderful game bird stamps together as a collection," she said.

The club meets on the fourth Thursday of the month at St Mary’s Church in Mornington.