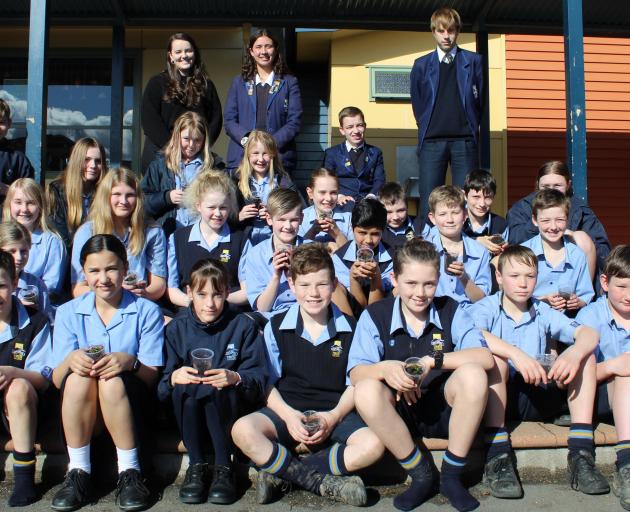 Teacher Brooke Martin (back row, left) stands beside environmental prefects (from left) Gabby Kakahi (17), Dylan Lloyd (17) and Hayden Armstrong-Jones (18) as pupils in her year seven class show kowhai seedlings they have been nurturing. PHOTO: SIMON HENDERSON
Pupils at Taieri College are showing their ability to be farsighted when it comes to improving their environment.

Environmental prefects Gabby Kakahi, Hayden Armstrong-Jones and Dylan Lloyd have been co-ordinating the school’s eco-warriors group to work on projects that will take years to reach fruition.

Pupils from the school were instrumental in formulating a planting design plan for the Silverstream Beautification Project.

The project, led by Mosgiel Taieri Community Board member Bran Peat, was granted $12,000 by the board in February to use for seeds, plants and materials.

Environmental prefect Dylan Lloyd said last year, with the help of a landscape architect, they designed a plan for the bank of the Silver Stream between Wingatui Rd and Gordon Rd.

Pupils consulted people in the community while devising the plan.

This year pupils were focusing on kowhai planting from seeds, and recently completed a seed challenge with year seven and eight pupils.

Each class was given four pots for pupils to plant a kowhai seed, and the first class to sprout their seeds won various prizes, ‘‘so it gave them the drive to learn about planting the seeds’’, Dylan said.

One class, 7MB, took it a step further and most of the pupils in the year seven classroom were growing a kowhai seedling.

‘‘We gave each class four pots but this class decided to do way more, which is an awesome, awesome effort by them,’’ Dylan said.

In about 18 months, when large enough, the kowhai would be planted at the Silver Stream site.

The efforts at the college were highlighted at the recent Keep Dunedin Beautiful awards, when the school was commended in the Dunedin Amenities Society best school project award category for its continued work to improve the banks of the Silver Stream.